Stacey Evans tells LGBT supporters ‘I will always have your back’ 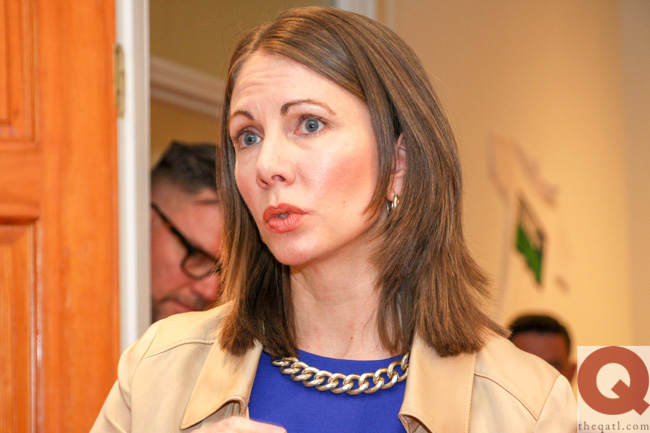 Stacey Evans – a former state lawmaker now seeking the Democratic nomination for governor – met with LGBT supports in Midtown Atlanta, pledging to fight for LGBT equality and to “always be there for you.”

“I will always have your back and I will always be there for you,” Evans told a crowd of about three-dozen people on Thursday.

“I will always be there with you, both in fighting proactively in passing laws that will protect the community but also symbolically to literally stand with you, lock arms and walk through the streets to say that we're in this together. It's not just the right thing to do because you should treat people the right way and love your neighbor as yourself, but also because that's how we're going to continue to be the thriving Midtown community, the thriving Atlanta and the thriving Georgia economy that we all want to see,” Evans said.

The comments came during LGBTQ + Cocktails & Conversations with Evans, one of two former lawmakers seeking the Democratic nomination in the May 22 primary. The event took place a day after Georgia Equality, the state's leading LGBTQ equality organization, endorsed Evans' opponent Stacey Abrams.

Evans touted her track record of introducing legislation to protect LGBT people and fighting against anti-gay “religious liberty” bills. In 2017, Evans introduced a sweeping civil rights bill that would protect LGBT people and others from discrimination in housing, employment and public accommodations. In October, she and Abrams were the first major party candidates for governor to participate in the Pride parade.

Earlier this year, Evans denounced as “hateful” legislation in the state Senate that would allow faith-based agencies to ban adoptions by LGBT people. And in 2015, Evans fought against “religious freedom” legislation by proposing a series of amendments to the bill offering LGBT protections.

“I am proud that in my last session I introduced comprehensive civil rights protections in public accommodations and employment because we need to take a proactive stand against discriminatory practices across this state,” Evans said.

Evans also pointed to that public accommodations bill when asked what she would do as governor to combat recent complaints of harassment from LGBT-owned businesses in Midtown. As governor, Evans said, she would pursue establishing incentives to encourage community policing, pay raises for police and increased sensitivity training for law enforcement officers.

“At the end of the day, we are dealing with a hearts and minds issue. We can pass laws and we need to pass as many laws as we can to keep us all safe and keep us all being able to call the police and expect that they will be there to protect us,” Evans said.

But Evans added that it's critical for lawmakers to pass LGBT-inclusive civil rights protections, something conservative lawmakers and lobbyists continue to block at the State Capitol.

“Comprehensive civil rights legislation protections against discrimination in public accommodations and employment will also give you a tool. When you're being unfairly targeted, it gives you protection under the law and gives you the ability to go into court and say something about it. I know right now you don't have that opportunity and I want to fix that,” Evans said.

Evans also blasted Republican candidates for governor for pledging to pass “religious freedom” legislation if they are elected.

“We've got Republicans – all the leading Republicans trying to be your next governor – trying to put hate ahead of people and ahead of jobs, scaring out the Amazons of the world, putting the film industry on shaky knees wondering if this is going to be the kind of place, the kind of environment they want to stay in. We want to make sure that we are always the state that is open for business and closed for hate. I don't know why that's hard,” Evans said.

She also specifically targeted the GOP front-runner for governor, Lt. Gov. Casey Cagle, for presiding over a state Senate that passed a ban on LGBT adoptions earlier this year and continues to push other anti-LGBT legislation. Evans credited Gov. Nathan Deal for vetoing a wide-ranging anti-LGBT “religious freedom” bill in 2016, but made it clear to her LGBT supporters that Cagle will pander to anti-LGBT conservatives if he is governor.

“Casey Cagle is not Governor Deal. They may be from the same part of Georgia, up in Gainesville, but they are not the same. It's been proven time and again that Nathan Deal – I don't agree with him on everything he did obviously – but he stood up and made sure that Georgia remained a place open for business and closed to hate, which was a very adult thing to do. That was what leaders should do,” Evans said.

“Now, what does Casey Cagle do? He gets into a primary and pledges support for the so-called religious liberty legislation. He allows a bill to pass through his chamber that is going to say that same-sex couples can't adopt children in certain circumstances. That is wrong. That's not what a leader does. That's called pandering,” she added.