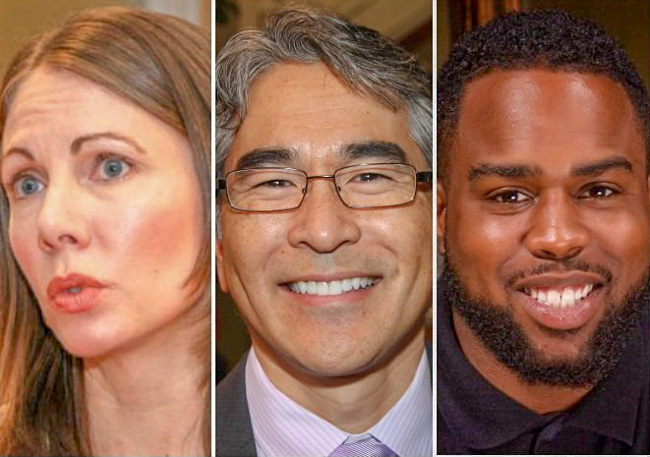 Former gubernatorial candidate Stacey Evans raised $100,000 and jumped out to a sizeable fundraising lead over two LGBTQ candidates in a state House race in metro Atlanta.

Evans (photo left) told Project Q Atlanta she was “very proud and excited” about the haul.

“We’ve got support all across the district,” she said. “We think this shows our strong support and momentum and we can’t wait to sprint to the finish line in May.”

Wan (photo middle) said his campaign team was “pleased” to hit their fundraising goal for the first disclosure period.

“We are on track to run the campaign we have laid out to reach the voters in District 57,” he said. “We are particularly proud of the number of supporters in our report that live in District 57, demonstrating the early energy and momentum we have coming out of the gates.”

Lamont (photo right), who jumped into the race a month after Wan and Evans, said his campaign recently hired a fundraiser.

“While [the fundraising total] may appear small, we’re excited about the momentum we’ve started and we expect our numbers to rise dramatically,” he said. “It speaks to the local people on the ground truly invested in the community.”

“Our grassroots efforts are 20 times stronger than Stacey’s or Alex’s. I think that’s our secret weapon,” he added.

Wan and Evans entered the race in December, shortly after Gardner announced she was giving up the seat. The Victory Fund endorsed Wan in January.

House District 57 stretches from Southwest Atlanta through downtown and into Midtown.