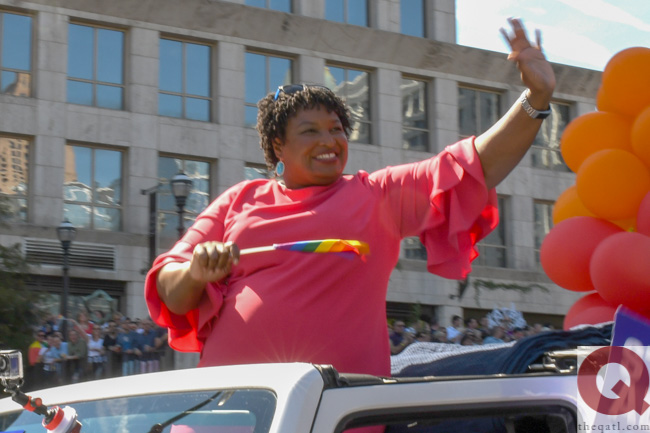 “It’s important for us to understand that we have to have allies everywhere,” she said. “And there’s no better place to have an ally in Georgia than in the governor’s office.”

She noted the controversial confirmation of Brett Kavanaugh to the U.S. Supreme Court, saying, “a terrible history was made.”

“I am a woman of faith, and that is why it makes me so angry that anyone would try to use my Christian faith to discriminate against anyone in the state of Georgia,” she said.

“I will not stand for losing access in the state of Georgia because somebody who wants to pass discriminatory legislation wins this election,” she added.

Abrams addressed Kemp’s absence at Atlanta Pride during an interview with Project Q Atlanta after her speech.

“I’m running to be leader of all of Georgia. And I think it’s an important thing to do to stand up and say that no matter who you are, no matter who you love, no matter how you identify, you’re part of our state,” she said. “I’m very sad that I’m the only candidate that’s made the decision to do this in this election.”

“He is promising to discriminate against the very community he is trying to court,” she said. “And that type of hypocrisy just means he can’t be trusted.”

Abrams also spoke at Augusta Pride in June. Over a third of her campaign team identifies as LGBTQ.

Abrams – wearing a pink dress to mark the occasion – was followed by the contingent supporting lieutenant governor candidate Sarah Riggs Amico. Abrams marched in last year’s Pride parade along with then-Democratic rival Stacey Evans, but Abrams had not yet secured the Democratic nomination. In 2010, Libertarian John Monds took part in the parade during his run for governor and Democrat Roy Barnes did not.