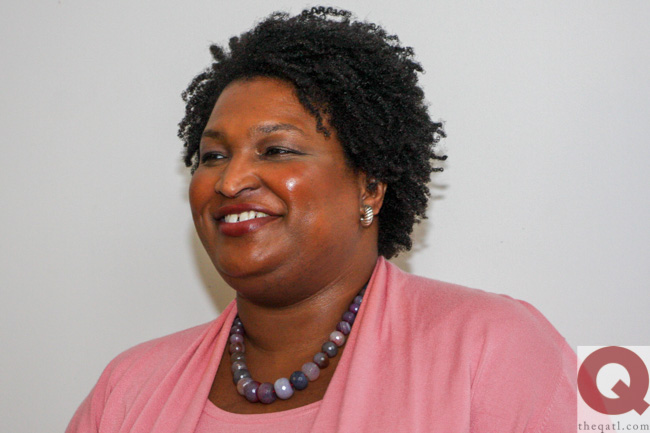 Stacey Abrams is heading to the Castro on Thursday for a fundraiser hosted by a group of lesbian leaders in the technology, political and nonprofit worlds.

The former Democratic nominee for Georgia governor will raise money for Fair Fight, the voting rights group she founded after losing the election to Brian Kemp last fall.

The event is part of the Lesbians Who Tech summit being held at the Castro Theater in San Francisco on Feb. 28 to March 2.

Abrams (top photo) said the fundraiser is a continuation of her support for LGBTQ people.

“Allyship is a critical component of any movement for civil rights,” she told Project Q Atlanta. “As I seek to center diverse voices in my work, I will remain committed to listening to the LGBTQ community in Georgia and across the country.”

“Lesbians Who Tech is a central gathering for LGBTQ leaders and their allies, and I hope to learn from them and share insights from Georgia on entrepreneurship and civic engagement,” she added.

Among the names on the host committee are Kate Kendell, executive director of the National Center for Lesbian Rights, and Kara Swisher, the technology business journalist who founded Recode. Tickets range from $250 to $2,500.

Abrams has been a fervent opponent of anti-LGBTQ “religious freedom” bills. She backed that sentiment, and her potential LGBTQ constituents, in multiple, extensive interviews with Project Q during her campaign for governor. Abrams ran a diverse campaign as well, with a staff of some 40 people, a third of whom were LGBTQ.

Abrams said she will announce which race she will run in — between challenging Sen. David Perdue in 2020 or going for a rematch against Kemp in 2022 — by March.

Abrams also made an appearance at Lesbians Who Tech in 2017.