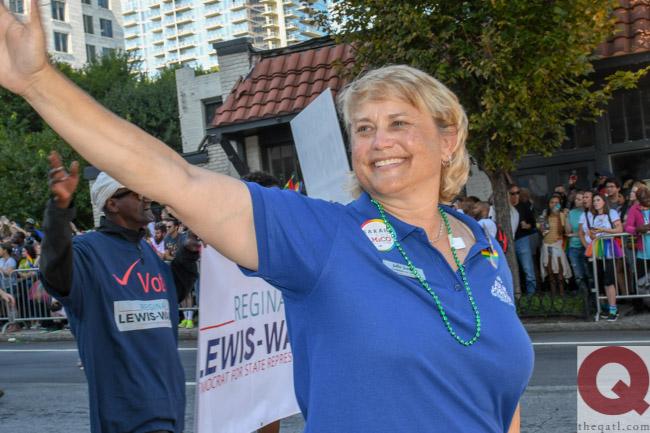 When Julie Jordan took on state Rep. Don Hogan in House District 179 in 2018, it was the first time in eight years that voters saw a Democrat in the race — in 2020, she wants them to see one in office.

The school administrator lost by about 16 points to Hogan in that election in St. Simons, falling short by about 3,000 votes.

“I’ve got room for improvement on the turnout,” she told Project Q Atlanta. “This time, I think I can take it over the finish line and win it.”

Jordan (photo) would become the sixth openly LGBTQ member of the legislature if she wins. HD 179 has been represented by a Republican since 1976, according to the Georgia General Assembly’s Legislative and Congressional Reapportionment Office.

Jordan announced her candidacy on May 20 as part of a group of women endorsed by Georgia WIN List, a political action committee with a mission of electing pro-choice Democratic women. The announcement of that batch of female candidates was a direct response to the passage of House Bill 481, which basically bans abortion in Georgia.

She also said Georgia took a step backward on healthcare in this year’s legislative session, and that the state needs to expand Medicaid.

“It just kind of solidified that I wanted to run again to make sure everyone’s voice is heard,” she said. “Everything that’s being done now is basically for wealthy people and not the working families in my district.”

Jordan called on the legislature to pass a hate crimes bill and a bill banning conversion therapy in the 2020 legislative session. And she drew a parallel between women and LGBTQ people.

“If people are attacking women’s rights, they’re also attacking LGBTQ rights. So that’s not far behind,” she said. “If one group isn’t safe, then none of us are safe.”

It’s unclear whether Hogan will run for a third term or retire.

“I’ve heard rumors that he’s not going to run again, but I really haven’t stopped working,” Jordan said. “I’m doing a rollout of new social media [channels] and a website at the end of this month.”

Hogan did not respond to Project Q Atlanta’s questions about whether he will run again in 2020.

This time around, Jordan will be able to devote more time to the race — she’s retiring on June 28.

“I think just when you run for office, so many people believe in you and have faith in you and I don’t want to let anybody down,” she said. “I’ve done my service in the school system, I’ve advocated for children and students and parents for 30 years and now I have an opening to take the next step.”