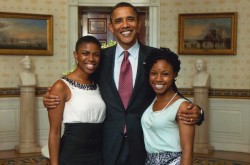 The former president of Spelman College’s LGBT student group has received national recognition for her work on LGBT issues, including helping to create the school’s first Pride week, boosting awareness of gay issues and calling attention to the troubled dress code of neighboring Morehouse College. The recognition also led JeShawna Wholley (photo left) to meet President Obama during a White House reception to commemorate the 40th anniversary of the Stonewall Riots. Wholley received the 2011 Campus Pride Voice & Action National Leadership Award after being named one of the organization’s Top 12 Leaders in Action. “It feels wrong to sit by passively while important social matters that affect not only me but generations to come need to be addressed,” Wholley says in a prepared statement announcing the award. “The work that I do is an essential part of who I am, and I find out more about myself the further I am able to advance in the fight for human equality.” In addition to leading the Spelman student group, Afrekete, for two years, Wholley also served as a panelist during the State of Black Gay America Summit in Atlanta last September. She is set to graduate in May. Photo: JeShawna Wholley (left) with President Obama and Soraya Watkins, president of Feminist Majority Leadership Alliance at Spelman