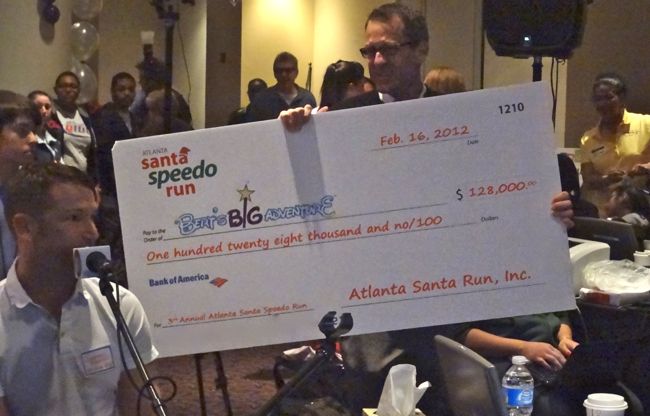 The hunk-filled Atlanta Santa Speedo Run delivers big – a big crowd, scores of sexy guys in Speedos and an even bigger check to charity, which they presented to Q100 radio jock Bert Weiss on Thursday’s show.

Organizers of the event – including gay jocks Jeremy Ploessel, Sean McKinley and Ted Turek – stopped by “The Bert Show” early Thursday to deliver a $128,000 donation to Bert’s Big Adventure, a non-profit that provides trips to Disney World for terminally-ill children and their families.

The money was raised when more than 250 people took part in the run last December, braving chilly temperatures and gawking spectators to jog through Midtown while wearing little clothing. Since its inception in 2009, Atlanta’s version of the run has donated more than $200,000 to charity.

“This is the biggest year that we’ve ever had,” Ploessel said during the check presentation (video). “Our objective here in Atlanta is to have a really fun event that brings the community together and gives back to the community.”

Photo via “The Bert Show”