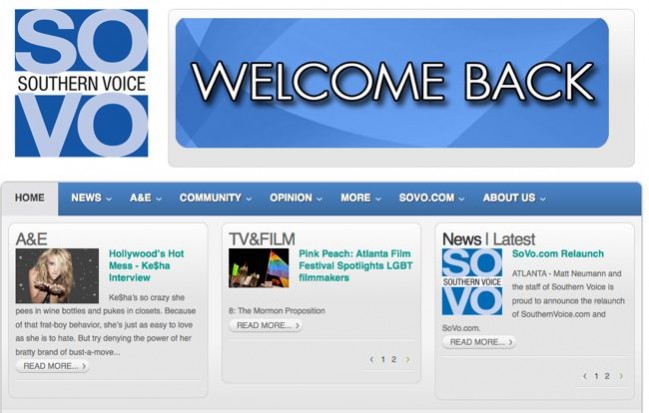 The launch of Southern Voice under its new owners is unfolding in stages this week, despite the company’s own marketing efforts announcing an April 14 start to “The Original Voice.”

Gaydar Magazine LLC, which picked up the assets of SoVo and David magazine in bankruptcy court in February, launched a new SoVo website on Wednesday evening (top image). A print edition was also expected to hit the streets on Wednesday, a launch date pushed back a week over quality concerns and several weeks past the March launch date the company initially offered when it bought the paper. 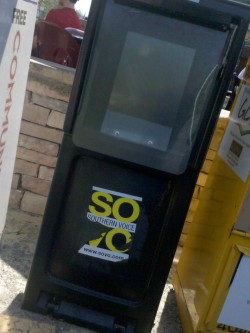 “Our launch was yesterday – that was the web launch,” Sawyer says. “Our paper launch is Friday — it will be physically on the streets. If it was assumed [the print edition would appear on Wednesday], our apologies. We were always having a Friday street date.”

The company’s own marketing materials and an April 8 press release made no distinction in the launch of SoVo’s website and the print edition when it announced an April 14 start. The Associated Press reported April 9 that Matt Neumann, Gaydar’s co-owner, said “he’s going to start publishing the newspaper again Wednesday.”

SoVo’s new website includes a light offering of local and national content. It includes an interview with pop singer Kesha, a syndicated entertainment column, an editorial about spring cleaning, and an interview with Joan Garner, a lesbian who recently announced she’s running for the Fulton County Commission.

Sawyer says SoVo’s debut print edition will be 32 pages and the paper will print weekly. He declined to say how many copies will be distributed, though Neumann told the Associated Press that he plans to initially print 10,000 and distribute them in Tennessee, South Carolina and Alabama, in addition to Georgia.

“I think people will be very pleased with our first edition,” Sawyer says. “We intend to fill all of our boxes and all of SoVo’s original distribution points.”

Sawyer also declined to say how many distribution boxes SoVo has in place.

The Friday publication date of SoVo puts it on the streets the same day as the biweekly GA Voice, which launched on March 19 and is scheduled to distribute its third issue on Friday.

Gaydar successfully rebranded its namesake nightlife publication as David and launched it on March 10 with a 64-page issue. The publication has since grown to 80 pages.