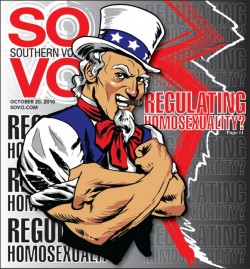 No sooner did we chronicle Southern Voice’s double-dose of missing papers than it reappears with three consecutive issues, a few shots at Pride and now finds itself in the middle of a little “Kaos.”

Chaos, of course, is nothing new for the crew that publishes SoVo and David. The paper missed issues in May, June and September; their website revamp was not without issues; some of their content is “allegedly” plagiarized; they blow through staffers like kids in a candy store; and their spelling of Southern cities is suspect.

But in the same week we wondered if SoVo had gone missing, they pop out a 32-page “Haunted House Issue” on Sept. 29. It was their first paper since Sept. 10 with – similar to past skipped issues – no explanation to readers. They also didn’t bother to offer a reason why they were covering Halloween a month early or why the paper changed its publication day to Wednesday from Friday. Whatever.

The Sept. 29 issue was the first of four consecutive papers they’ve produced, mostly on time. Well, let’s be clear: We’ve seen a cover for their Oct. 20 paper (top image) – which would be the fourth paper in a row — but haven’t picked up a hard copy yet. Last month, they produced an issue electronically but never printed it.

The Oct. 6 edition – the one before Atlanta Pride – included a handful of Pride-related calendar items, a cartoon cover that says “Happy Pride” and a map of Piedmont Park in its 32 pages. That’s it. So much for previewing the largest LGBT event of the year. Their post-Pride paper on Oct. 13 included about a dozen photos from the festival and two essays criticizing the event. David’s Oct. 6 issue included the same limited Pride event listings as SoVo for its preview. Nice.

It could be lingering resentment for being barred from the festival.

Or it could be that the company’s owner is distracted with “Kaos.” That’s Kaos as in “Georgia’s Newest GLBT Nightclub & Showbar,” according to its website. The gay bar in Macon opens Friday, and Matt Neumann – an owner of Gaydar, which publishes SoVo and David – is affiliated with the club. 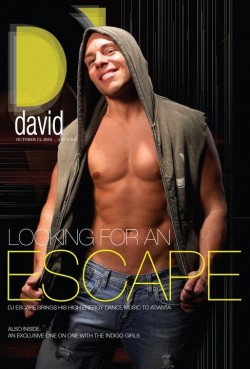 Neumann tells the GA Voice he’s helping a friend open the club, but is shy about providing the owner’s name or other details of his affiliation with the new venue.

The bar is currently a straight bar but will become an LGBT bar later this month, meaning the liquor license and zoning codes are already in order, he says. Neumann says he is helping to line up some of Atlanta’s top acts to perform at the club.

The bar is undergoing some renovations, Neumann adds. The bar will be open Thursdays through Sundays with go-go boys on Thursdays, the Kaos Kabaret on Fridays, DJs spinning on Saturdays for dance parties and on Sundays a brunch and tea parties. Unlike Atlanta, bars can remain open until 3 a.m. on Sundays, he says.

Neumann has some ties to central Georgia; a former owner of Gaydar before it purchased SoVo and David lived in Macon. He says Kaos has nothing to do with SoVo and David, though the club enjoys a two-page ad in the Oct. 13 issue of David.

It could be that the interest in Macon is pretty simple — the city is easier to spell than Chattanooga and Atlanta. David misspelled the former on its Sept. 15 cover and the latter on its Oct. 15 cover (second image). They do know “Kaos” is really spelled “chaos,” right?