A last-minute bid by the publishers of Gaydar during a bankruptcy hearing Thursday landed the weekly nightlife glossy the name and other assets of Southern Voice and David magazine.

The $9,000 bid usurped the efforts of former SoVo staffers and its co-founder, who had proposed buying the assets for $8,000 as they also work to launch Georgia Voice in the coming weeks. The surprise move by Gaydar came as a federal bankruptcy judge approved the sale of the former Window Media and Unite Media to three groups, marking the final step in the dismantling of the nation’s largest publisher of LGBT newspapers little more than three months after its collapse.

Judge Mary Grace Diehl approved the sale after a 20-minute hearing on Thursday in downtown Atlanta that focused mostly on the competing bids for the remains of SoVo and David. The sale included a $15,000 bid for the Washington Blade from Brown Naff Pitts Omnimedia, Inc., a company created by former employees of the Washington Blade who launched D.C. Agenda in the wake of the Blade’s collapse.

The sale also included a $3,200 bid for the South Florida Blade and 411 magazine from Peter Clark, who is the Fort Lauderdale, Fla.-based publisher of Hotspots magazine. Those assets also included the URLs for Genre magazine, which ceased publication in March. After the closure of the publications in Florida, several former employees were hired by the publisher of Mark’s List Magazine and Jump On Marks List who then launched Florida Agenda.

The $9,000 offer for SoVo and David from Gaydar Editor Matt Neumann gained the support of Jeffrey Kerr, the bankruptcy trustee overseeing the case, and Stuart Clayton, an attorney overseeing the case. Clayton told Diehl that the pair had doubts about the ability of Georgia Voice to fund its $8,000 bid, which was to be paid through installments over 14 months.

“We have questioned the Gaydar people on their ability to pay and the trustee is confident,” Clayton said during the hearing. 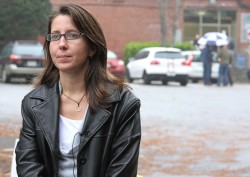 Laura Douglas-Brown (photo), SoVo’s editor when it closed and the co-founder of Georgia Voice, proposed upping its bid to $10,000 but sticking to a plan to pay $4,000 when the sale closes and the remainder in eight monthly installments beginning six months following closing. Kerr objected and said the cost to administer the installment plan proposed by Georgia Voice would eclipse the additional $1,000 the new company was offering.

Diehl agreed and approved the offers from Gaydar and groups in Washington and Florida. The overall sales price totaled $27,200, a fraction of the $11 million in debt that led the company to abruptly close its doors Nov. 16 and file for bankruptcy days later.

“Those sales will be approved,” Diehl said as the hearing ended.

Clayton said he expected the sale of SoVo and David assets to Gaydar to close early next week.

Neumann said the legacy of SoVo and David prompted him to make the offer to buy the assets of the former publications. He said he’s considering rebranding Gaydar as David and reflagging the Atlanta Free Press as Southern Voice.

“I am a longtime fan of David and SoVo and I don’t like the way they went out,” Neumann said after the hearing. “We just thought about it in the interest of not letting it go by the wayside.”

Gaydar and the Atlanta Free Press were published under Nightlife Media Group, though recent issues of the magazine indicate it’s now published by Gaydar Magazine LLC. That company was registered with the Georgia Secretary of State’s office in September 2009 and lists Macon resident Ennis Grady Odom as its registered agent and CEO. Neumann is not included in the corporate registration.

The Atlanta Free Press hit the streets Dec. 10 with the promise of filling in for Southern Voice, but the newspaper ceased publication a few weeks later after firing its first editor over past plagiarism allegations and having its second editor and other staffers quit over concerns about editorial quality and charges that they weren’t paid. 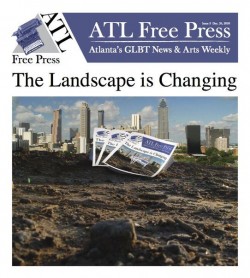 On Thursday, Neumann said he’s still sorting out what to do with the assets of SoVo and David, but declined to say if he will launch a second LGBT newspaper.

“It’s a lot to take in right now. We’re looking at what’s going to be in the best interest of the community,” Neumann said.

Douglas-Brown said that she is personally disappointed about not acquiring the assets of SoVo and David, but that the sale to Gaydar won’t impact the launch of Georgia Voice, which is expected to take place in March.

“My disappointment is as the former editor of Southern Voice and wanting to be sure our community history and the SoVo legacy is protected and preserved,” Douglas-Brown said. “As the editor of Georgia Voice, I am not concerned at all.”

She said a driving factor in the Georgia Voice bid for the assets of the closed publications was to gain control of SoVo’s extensive print archives so they could be donated to a library, preserved and made accessible to the public. She added that they intended to purchase the SoVo and David names and retire them. Neumann declined to answer questions about plans for SoVo’s assets and the archives.

“We want [the archives] to be preserved. We know that history. We wrote that history,” Douglas-Brown said.

Neumann approached Douglas-Brown before the hearing to discuss possible partnerships or the sale of SoVo assets to the Georgia Voice. But Douglas-Brown said that although they would discuss buying the SoVo assets, they would not be working with Neumann or Gaydar.

“We will definitely not be working with them in any formal business way. I can’t comment [more] until we see when the bid closes,” she said.