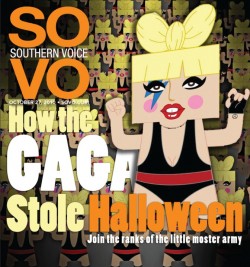 If you’ve been on a Southern Voice death watch, consider this: The once weekly mainstay of gay readers in metro Atlanta, missing from newsracks since sometime in December, will return just before Valentine’s Day. Love that, naysayers.

That’s the word from publisher Matt Neumann, who would only hint at the upcoming changes to the sister publication of David magazine. Here’s what he offered on Tuesday: A rebranded SoVo will emerge Feb. 10 with new features, a more cutting-edge approach and a publication schedule that drops its weekly ambitions and replaces them with an every-other-week approach.

The paper is now scheduled to print in the weeks the GA Voice does not, ending a head-to-head competition that sometimes saw both papers hit the streets in the same weeks.

“Between GA Voice and Southern Voice, neither of us have been able to get much above 28 pages,” Neumann says. “I’m not sure what the market can bear. That was part of the decision making process.”

He says details of the reemergence of SoVo will be offered in a press release on Wednesday that will also include an explanation of the weeks-long gap between the last issue of the paper sometime in December and the Feb. 10 launch.

Hitting the reset button on SoVo will come just two months before Neumann celebrates the first anniversary of launching the paper after it closed during bankruptcy in November 2009 under previous owners. It’s been a tough haul since his first SoVo on April 16.

The paper experienced delays before finally printing, the company has been sued by a former printer, it tangled with the GA Voice before offering to sell to them, it got booted from Atlanta Pride, a news editor quit and then an editor, it faced an allegation of plagiarism, and missed its weekly publication schedule in May and June, again in September and disappeared altogether after a paper dated Dec. 2. The SoVo Facebook page was last updated on Nov. 8 and its website has offered limited, mostly non-local content sporadically over several months.