The keys to the executive washroom at Southern Voice and David Atlanta are changing hands — again.

Already mired in an advertising slump hitting the entire industry, dwindling page counts and a federal bankruptcy that could sweep in new ownership later this year, the publisher of the two publications is leaving after just five months on the job.

Kevin Hopper (photo), who split his time between the Atlanta publications and South Florida Blade and 411 Magazine in Fort Lauderdale, is apparently being feted in a going away party tonight in Wilton Manors, Fla. that starts at Rosie’s and continues as a bar crawl.

From the Facebook invite to the “Kevin Hopper Last Day Happy Hour/Bar Crawl”:

After 10 years with 411/The Blade, Kevin is moving on to Dynamix Unified Solutions as Senior Vice President of Sales & Marketing. Join him on a bar crawl starting at Rosie’s and hitting New Moon and Matty’s! 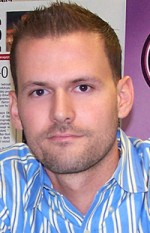 Hopper’s portfolio at Window Media and Unite Media, the companies that publish the gay papers and mags, expanded to include the Atlanta units last November when the local publisher was ousted. He became the third publisher of the publications in about 18 months.

Hopper started with the Florida publications in 2000 and rose through the ranks to sales manager and, in 2006, to publisher of the South Florida Blade (then the Express) and 411 Magazine.

Hopper’s departure is part of a continuing shuffle at the publications, which have undergone staffing cuts to their editorial operations. In January, a senior editor for the Atlanta publications was downsized and last August, Window Media cut editorial assistants at Southern Voice and Washington Blade.

When Hopper was promoted in 2008, the announcement was made by Bill Kapfer, then vice president and publisher of Genre and co-president and chief marketing officer at Window. Genre has since folded and Kapfer left the company.

It’s been a rocky go of late for the Atlanta publications and their publisher. Avalon Equity Fund, the New York-based investment company that owns a majority stake in the publishers of SoVo and David, is in federal receivership—a form of bankruptcy—and being sued by the Small Business Administration. David Unger, the force behind Avalon, is under investigation by the U.S. Department of Labor. Freelancers have filed suit over not being paid for their work and staffers have complained of delays in receiving their paychecks.

Despite this, David Atlanta launched a redesigned magazine in late February. Though that issue was fat with ads, the count has dropped considerably since and the magazine’s overall page count lingers around the historic low of 64. It’s dropped meatier content for expanded event listings and photos.

Southern Voice hit the streets April 16 with a new look and a fatter than normal page count (40). Like many papers across the country, SoVo pitched its redesign as environmentally friendly though in reality the smaller pages — though they may save paper over the course of time — mean less content. The paper also said at the time that it will soon change to 100 percent recycled paper.

The redesign freshened up the paper’s look, but it suffers from fewer resources and less local stories. The page count in recent months has dipped to 24 pages, an historic low and a far cry from earlier this decade when it offered three times as many pages. Less staff and a smaller newshole can’t be a good thing, redesign or not.

Though Hopper will be knocking back a few in South Florida as he waves goodbye tonight, it’s the staffers left behind in Atlanta who might need a drink or two.