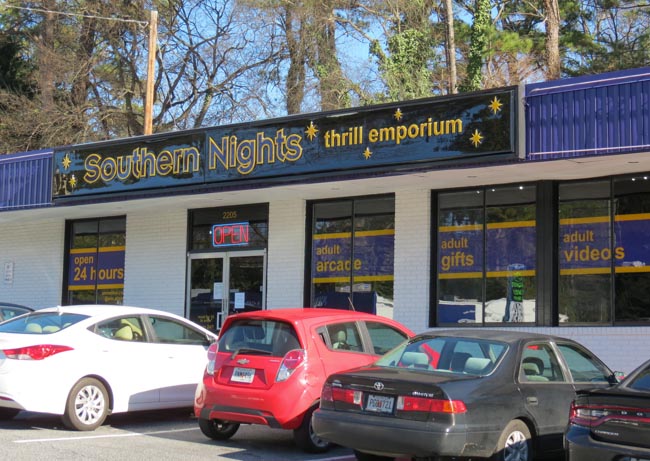 With an influx of new development and tons of apartments, Cheshire Bridge Road is changing. So one longtime business on the strip catering to LGBTQ customers decided it was time for a remake.

The 4,700-square-foot retail outlet, between Lenox Road and Woodland Avenue, has called Cheshire Bridge home since 1996. But with the influx of new development around it — and waning interest in renting the sex flicks that were long a staple of its business — store owners decided it was time for a facelift.

“We did just about everything — a total rehaul,” co-owner Stephanie Fox said. “It looks about 1,000 times better than it did.”

The exterior received a fresh coat of paint and new signage, while work inside was even more extensive. The interior overhaul included new flooring and doors, replacing walls, new shelves and improved lighting so customers can more easily see the expanded lines of merchandise.

“We’ve been open since 1996. It was time to make it a little fresher and more pleasing to the eye,” Fox said.

“We had to spruce everything up to get with the times around here,” she added.

The renovation project — Fox declined to say how much it cost — kicked off last summer and wrapped up six months later. Gone were the rows and rows of adult movie rentals, replaced by more adult toys and sex supplies that, conbined with its convenient location and ample parking, the store’s owners hope will continue to attract LGBTQ customers (and more) for years to come.

“The gay community has always been a really big part of our business,” Fox said.

Online and mobile options for catching those sex flicks has cut into the once-lucrative movie rental business. Southern Nights still rents them, but at a much smaller volume, Fox said.

“Before we had toys, but we didn’t really focus on them because our movie business was so good and we had new movies every day,” Fox said.

Now they focus even more on having “anything you could possibly need” for those sexy-time inspirations. Toys, lube and “everything that goes with that,” Fox said. And the store lets you see merchandise up close before buying, which isn’t an option when ordering online.

“You can buy anything on Amazon, but you can’t see it. It’s better to come in and hold it in your hand and feel it in your hand, especially when it’s a toy,” Fox said.

Even though Amazon may deliver what you want in a few days, you can pick it up at Southern Nights when the mood to play strikes.

“Sometimes when you want something, you’re in the mood and need it right then,” Fox said.

The video arcade — and its more secluded entrance on the side of the building — remains as popular as ever, she said.