When this Southern lesbian couple gets hitched, what happens? Lots of boobs and an argument over how to control them that plays out on TLC's popular “Say Yes to the Dress: Bridesmaids.”

TLC is taking this gay marriage thing seriously. In July, Atlanta couple Michael Ivy and Chris Gage did the show as they hashed out differences over bridesmaid dresses that went traditional or offered something a little contemporary. And then the tragic backstory.

The show returns its focus to the gays with Amber Duncan and Ajeshia Marquez, a Greenville, S.C. couple featured in an episode titled “Breaking the Rules” that was shot in Atlanta's Bridals By Lori. Marquez debuts her Boob-O-Meter, which you can see in the highlights clip above. And bridesman Billy!

Same-sex couple Amber and Ajeshia agree that a flowy bridesmaid dress would perfect for their Puerto Rican wedding but cannot compromise on necklines.  Bride Ajeshia wants the cleavage contained and even brought along a “boob-o-meter” to rank bust lines.  Drama heightens when the two brides finally agree on a dress, only to have a maid hate it! Will these brides ever settle on a dress that pleases their maids and hits an acceptable level on the boob-o-meter scale?

We caught up with Duncan ahead of the episode, which debuts Friday, to ask about the show and the couple. 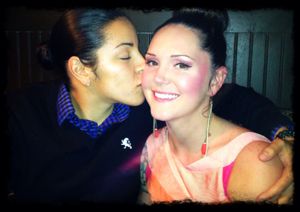 How did you two end up on the show? Describe what the experience was like?

I was actually shopping for my bridal gown at Bridals By Lori when Robin, the manager, asked us to fill out applications for “Bridesmaids.” She said we would be perfect for the show. When we came to film, it was fun, exciting and we were relieved to find a dress that will look great on each of the girls.

The show says a clash happened when you wanted a strapless dress and Ajeshia hoped for one with straps for the bridesmaids to dance in. Without giving away what happens, can you shed some light on how you two managed to come to an agreement on the dresses?

Well, I actually made a huge compromise.

Gay marriage remains illegal in South Carolina. How did you overcome that? And tell us some dish about your wedding and you two.

We did not want to have to move to a state where it is legal because we feel that staying here and showing people in this area that “we” are just as equal as they are would help change our community one person at a time, and we are still overcoming it one day at a time. We are getting married on the rooftop of a beautiful villa in Old San Juan, Puerto Rico on Oct. 24. We met on Oct. 24, 2010 so we wanted to keep this date. She is Puerto Rican so we go there twice a year and March 21, 2012 we got engaged there. We can't imagine getting married anywhere else!