Southern director ready for Out On Film closeup 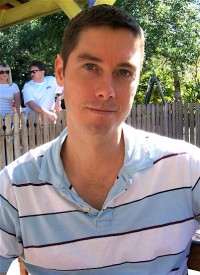 At various points, three high-profile actresses were attached to director Keith Hartman’s debut film “You Should Meet My Son” before he eventually zeroed in on the perfect performer. The comedy opens Out on Film on Friday.

Hartman (photo), a former Atlantan who will attend Friday’s Opening Night screening during Atlanta’s week-long LGBT film festival, was born in Huntsville, Ala., and lived in Atlanta from 1995 to 2000. During that time, he was working as a writer.

He has penned three books and was nominated for four Lambda Literary Awards. Two of his novels, including “The Gumshoe, the Witch, and the Virtual Corpse,” take place in Atlanta.

Hartman has actually been writing scripts for a long time as well, and he determined “Meet My Son” would be the easiest to produce. He figured out the hard way that one script was badly timed.

“I shopped one around, and learned I was not allowed to make fun of a president in wartime,” he remembers.

In the “You Should Meet My Son,” Stewart Carrico stars as Brian, a young man who has just broken up with his boyfriend. After trying to set him up with a number of women, his Southern mother Mae (Joanne McGee)—who Brian has never come out to—realizes her only son is gay.

Upset at first, she becomes determined to find him a partner, along with her sister Rose (Carol Goans). The only problem is that they don’t know any gay men and have no idea where to begin looking.

The director cut his filmmaking teeth on some short marriage equality/Prop 8 films while getting ready to make “You Should Meet My Son.” Academy Award winner Shirley Jones loved the role of the mother but a deal couldn’t be hammered out with her agent. Neither could a deal with Doris Roberts, the grandmother from “Everybody Love Raymond,” who also liked the script.

Piper Laurie was also on board for a while but quit before shooting, thinking she was not a comedic actress. She also felt that a mother would know by the time her son was in his ‘30s that he was gay.

“I wanted to say, ‘You should meet my mother in Alabama,’” Hartman says.

Luckily, he and his team met actress McGee, who nailed the role. He was afraid that she and co-star Goans would rehearse without him and fall into bad habits, but when he saw what they had developed themselves, he knew they had it just perfect.

The crux of the film, Hartman says, is the interplay between the two women, surfing the Internet for matchmaking sites and wading through a gay bar handing out pictures of Brian.

Although he is a Southerner, Hartman says that the film isn’t autobiographical. His own mother—who will attend the Out On Film screening with him—has never tried to set him up, he laughs.

He admits that at other screenings, he wasn’t sure how audiences would react to the Southern story, but he’s been encouraged that that film has proven popular. It won Best Comedy Feature at the North Carolina Gay & Lesbian Film Festival and missed the Audience Award for Comedy at Philly QFest by a fraction of a point.

Hartman is glad he stuck to his guns about the premise. He laughingly recalls one person telling him to “lose the women, focus on the boys and throw some pensies in.” He knew that this wasn’t the film he wanted to make.

“You Should Meet My Son” screens Friday as the Opening Night film during Out on Film, followed by an after party at Hotel Palomar. Read our preview of the festival including video from Friday’s film. For more information, call 678-237-7206, or visit Out On Film.