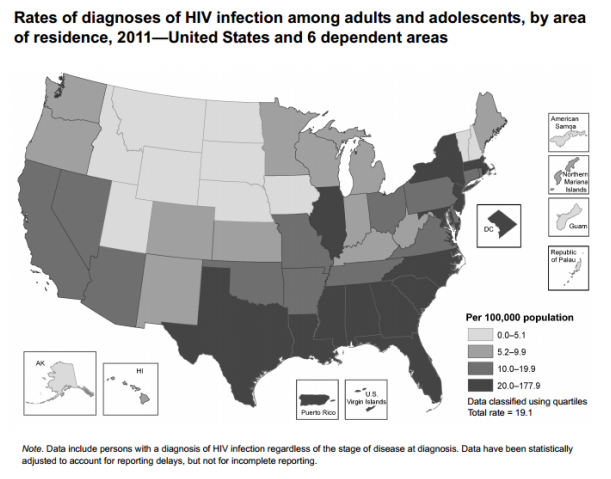 With the South’s gay marriage evolution a decade behind the national average, and even Atlanta’s blue island in a red state sea barely scraping a “B” on equality, is it any surprise that the same region shows rampant HIV infections where youth, people of color, and gay and bisexual men still bear the brunt, and poor education is to blame?

That’s the news out of the most “complete picture yet of diagnosed HIV infections in the U.S.” from the Atlanta-based Centers for Disease Control. The CDC’s HIV Surveillance Report also measured virus transmission nationwide from 2008 to 2011. When the results are mapped out (photo), it shows the highest rates almost like a gay marriage map of intolerance: A disproportionate number of the highest infections cut a black swath from Texas across the Gulf and up through the Carolinas.

The CDC partially blames puritan “abstinence only” sex education for rates among young people in many of those states, and Georgia isn’t the worst among them.

It’s likely no coincidence that many of those same states lack the comprehensive sexual education requirements that would help educate their residents about HIV transmission from an early age.

Health classes in Texas, Florida, South Carolina, North Carolina, Mississippi, and Louisiana aren’t required to provide any kind of medically accurate information about HIV. And in two of those states — Texas and Florida — public schools don’t have to offer any type of sexual health education whatsoever.

It gets worse when it comes to educating blossoming gay and bisexual teens on LGBT-specific sex issues.

The HIV epidemic continues to take a disproportionate toll on men who have sex with men (MSM) — 62 percent of all HIV diagnoses are attributed to male-to-male sexual behavior — yet the nation’s sexual health requirements also lag behind when it comes to sexual orientation.

None of the Southern states with the highest rates of HIV infection require public schools to provide LGBT-inclusive information in their health classes — and Alabama, South Carolina, and Texas actually stipulate that teachers must impart negative, shame-based information about homosexuality.

It’s sad that the only good news, if you can call it that, is that though as a region the South is by far the worst, we’re not alone. High HIV rates are particularly ugly in pockets of Illinois, New York and DC, too. Read the full report.