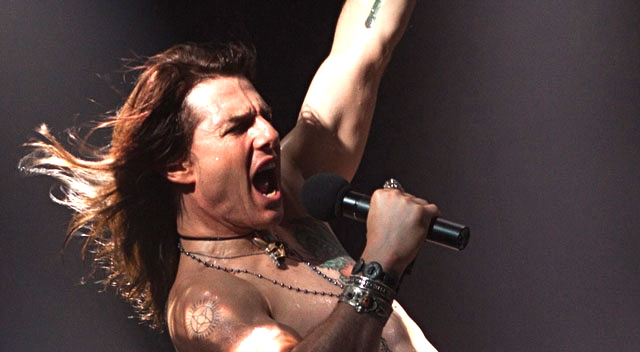 Gay director Adam Shankman struck gold when he brought the Broadway hit “Hairspray” to the big screen, but lightning doesn’t strike twice with his film version of the stage musical “Rock of Ages.”

Despite a gay subplot and Tom Cruise’s juicy turn as a rocker as two of just a few high points, the movie is highly forgettable. It opens Friday in Atlanta, and people considering checking it out should consider instead the following review as a warning.

On the Sunset Strip in 1987, Sherrie (Julianne Hough) meets Drew (Diego Boneta). She has left Oklahoma and come to Los Angeles to be a singer. He works at The Bourbon Room and is looking for his big break. The bar is owned by Dennis (Alec Baldwin) whose right hand man is goofy Lonnie (Russell Brand). Sherrie gets a job there, and she and Drew become a couple.

One night Drew gets some stage time and makes a name for himself, but his path and Sherrie’s cross that of leather clad Stacee Jaxx (Cruise, photo), a washed up rock star coasting on his laurels and managed by the sleazy Paul Gill (Paul Giamatti). The plot is strung along basically to songs of the era, from Journey to Styx to White Snake to Pat Benatar to Def Leppard to REO Speedwagon.

Onstage “Rock of Ages” was no great shakes, but it had a campy appeal and the musical numbers were fun and choreographed well enough. It also didn’t take itself too seriously. This adaptation is joyless filmmaking. Numbers start without having anything really lead into them and most are lacklustre, inadequately sung and choreographed.

For those who haven’t heard, Baldwin and Brand discover mutual love against a certain ‘80s song and share a big gay kiss. It’s a funny moment, and the two actors go at it with gusto. Mary J. Blige pops up later as a strip club owner. It’s hard to tell if the divine one can really act or not, but boy she can sing – and she blows Hough off the screen when they attempt a duet. Blige’s take of “Any Way You Want it” – with strippers and plenty of pole action – is one of the film’s rare highlights.

Catherine Zeta Jones overacts dramatically as the wife of a mayoral candidate (Bryan Cranston) who goes on a campaign to close the Bourbon Room. She leads a version of Pat Benatar’s “Hit Me With Your Best Shot” in a church that might go down in history as one of the worst movie musical numbers of all time.

Surprisingly, the sharpest thing about the movie is Cruise. He doesn’t go terribly deep with his character, but he does make an impression. And he can actually sing. Cruise and Malin Akerman – as a Rolling Stone interviewer — have one of the best sequences, tearing off each other’s clothes on a pool table while they croon “I Want to Know What Love Is.”

If the supporting cast occasionally gives the movie a boost, the leads sink it. Hough and Boneta are the deadliest, most inert screen couple since Kelly Clarkson and Justin Guinari hopped all over a beach in “From Justin to Kelly.” At least Boneta can sing a little and show some vocal range. Hough is a disaster. Her singing is colorless and flat, and her acting is worse. With her big Farrah hair, she looks the part, but that’s it. Hundreds of other actresses could have brought more to the role.

How a director who breathed such energy and love into every frame of “Hairspray” can come up with something so drab here is a mystery. Besides Shankman’s poor showing, the movie’s also interminable to boot at over two hours.

Sorry, hopefuls. The more you love movie musicals – and the ‘80s – the further you’ll want to stay away from this.

“Rock of Ages” opens in area theaters on Friday.

Jim Farmer is an Atlanta-based freelance entertainment writer and public relations professional. He has been a theater and pop-culture critic for more than a dozen years and is the director of Atlanta’s annual Out On Film LGBT film festival.