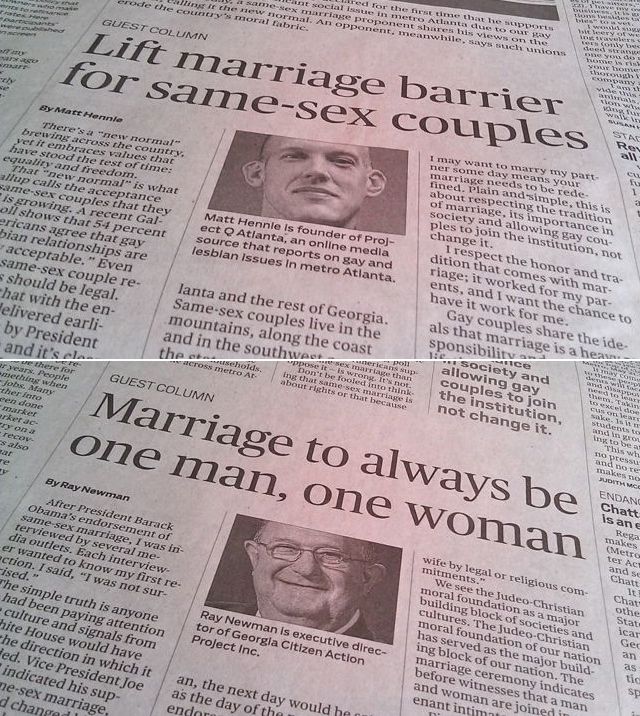 Gay marriage has been a bit of a thing recently. It’s all the rage among the gays and leaves you raging if you’re one of those blah-blah “traditional marriage” types who’s been divorced like 12 times. Now the Atlanta-Journal Constitution weighs in with some words from folks who deal in the currency of marriage. The AJC reached out to me to take part, hoping I’d live up to their quest for “smart work by some of the best thinkers in metro Atlanta” to preach for same-sex marriage on Thursday’s Atlanta Forward op-ed page. Whether I met that threshold is debatable. But I did pull together my argument in Lift marriage barrier for same-sex couples. I even got a shout out to my folks and the partner, who I think was a little concerned I asked him to gay marry me on the op-ed page. It’s the first time I’ve seen him read a newspaper in more than four years.

Don’t be fooled into thinking that same-sex marriage is about rights or that because I may want to marry my partner some day means your marriage needs to be redefined. Plain and simple, this is about respecting the tradition of marriage, its importance in society and allowing gay couples to join the institution, not change it. I respect the honor and tradition that comes with marriage; it worked for my parents, and I want the chance to have it work for me.

Of course, the AJC wanted both sides. So they turned to some old white religious guy to deliver the usual one guy, one gal argument. To his credit, Ray Newman didn’t go all Rick Santorum in Marriage to always be one man, one woman.

I am saddened we have come to the place in our nation where cultural changes are now impacting behavior more than the traditional building blocks that have served us well throughout history. I affirm my position in support of the definition of marriage as a union between one man and one woman.

That’s all fine, Ray. I’m not really interested in marrying you. Not my type. Besides, what he’s missing in his op-ed is the simple fact I used to open my side of the argument: “There’s a 'new normal' brewing across the country, yet it embraces values that have stood the test of time: equality and freedom.”