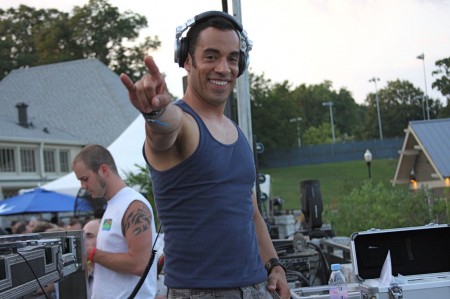 The annual summer event pulsated with the sounds of DJ Roland Belmares (top photo), who returned after providing the tracks for the event in 2008 when it was held at the Atlanta Civic Center.

Joining Hearts has raised $936,500 since its inception, fueled by ticket sales and tips donated to volunteer bartenders. Organizers hope this year’s “Return to Paradise” pushed the 22-year cumulative fundraising amount past $1 million. More than 1,000 tickets were sold for Saturday’s event, which benefits AID Atlanta and Jerusalem House.

Joining Hearts also marked the debut of the renovated swimming facility at the park, which was refurbished as part of a $41 million campaign to expand Piedmont. Joining Hearts was the first large-scale non-profit event to make use of the pool facilities.