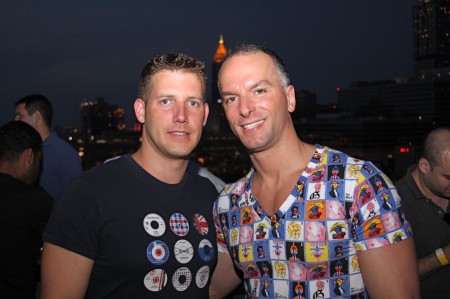 Social Tuesdays kept its rooftop theme going this week, moving to the bar atop the Glenn Hotel in downtown Atlanta.

The weekly cocktail networking event gathered at 11 Stories, the latest incarnation of the bar that sits above the 11-story boutique hotel. The space provides panoramic views of the city skyline and great views Centennial Olympic Park.

The promoters behind the weekly gathering — Kurt Edwins and Chris Coleman (top photo)–are keeping busy at least three nights a week. In addition to Social Tuesdays, the pair offers Hydrate Thursdays and Sol Sundays, both at the W Atlanta – Midtown.

Last week, Social Tuesdays perched itself poolside high above the city at the W Atlanta – Downtown. There, attendees had the chance for a helicopter ride across Atlanta between cocktails.

On Saturday, the group is also hosting the Official After Party for the CHRIS Kids Premiere Party, which benefits the organization’s LGBT homeless youth.