So many legendary composers, so few cabarets 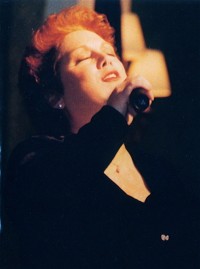 “So Many Composers, So Little Time” features music from gay greats Cole Porter and Irving Berlin, as well as the likes of Savannah native Johnny Mercer and Harold Arlen. The tribute show is new turf for Whittemore, whose venue, Libby’s: A Cabaret, was a local fixture and gay favorite for more than six years before closing in 2006.

“I’ve never done a revue about more than a single composer at a time, so this is new for me,” Whittemore says.

At her cabaret, Whittemore regularly staged revues such as “Girls Are Crazy For Gershwin” and “Ladies Love Broadway.” From the early stages of her career, she has performed work by Porter and Berlin.

“These guys were from the same era, early 20th century, and wrote so many great standards,” she says. “I love doing their work; it stands up. It’s hard to go into the American songbook and not find music by any of these four guys.”

Whittemore’s relationship with Actor’s Express started in 2002 with a well-received version of “Gypsy,” in which she headlined as Mama Rose. Years later the performer starred in the company’s “The Great American Trailer Park Musical,” directed by current Actor’s Express artistic director Freddie Ashley.

After her cabaret closed, she started performing at the Express.

“Freddie and I talked one day, and he said there needed to be a place for me to do this kind of cabaret,” she recalls.

Whittemore’s been a regular since, and her country alter ego, Connie Sue Day, has been known to make appearances there.

The performer relishes being able to do what he loves.

“When I was in my ‘20s, there were tons of cabarets and now there are none,” she says. “Cabaret is a dying art, but it still is an art. I’m glad I can still perform and have audiences appreciate the form.”