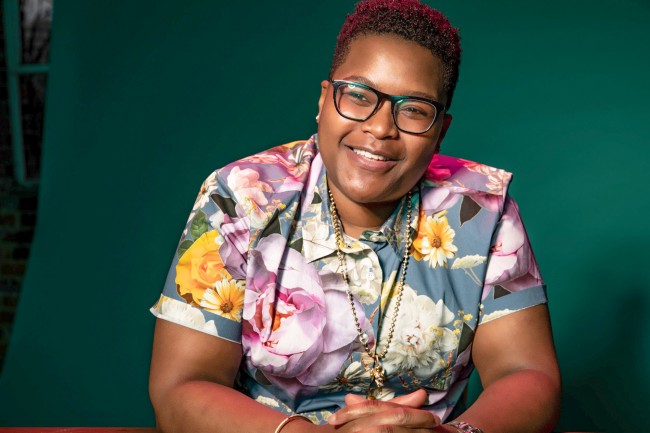 Queer comic and television writer Sam Jay is on her way to becoming a household name. Well, maybe not all the households yet, but definitely the fun ones.

Whether performing her impeccable stand-up comedy all over the world, on her new album, or as a writer on Saturday Night Live, Jay brings wit and warmth as a standout in every project she graces.

When Jay performs during two tapings at the Masquerade this week to film her full-length Netflix comedy special, the world is about to get an entree portion of this comedy dynamo.

What made you choose Atlanta as the location for your special?

I moved here to go to college. I got into Clark University, but I didn’t really go — just moved and partied.

First thought when you wake up?

Last thought before you fall asleep?

Depends. Sometimes nothing at all. Sometimes there’s only so much time left on this precious little planet

A lot of queer comedic performers cite humor as a defense mechanism they developed. Is this true for you?

I think I have for sure used humor to defer several things — my blackness, my gender, my weight, my sexuality— but I don’t think that’s really different than any person battling what they feel their flaws are.

I guess the difference is when you’re made to feel the things you can’t help are flaws, but then again everybody feels like they can’t help some shit, so like just mind ya business.

Favorite thing to hear after you perform?

Least favorite thing to hear after you perform

“What was his name?”

Who is your favorite comedian?

Jak Knight. He just takes all the shots. It’s fun to watch someone be free up there

If your comedy was a side dish, what would it be and why?

It would be the brownie in a TV dinner. When the mood is right, that shit hits, but like lots of the time, you like, “Yeah no, I ate.”

Does your queer sensibility inform the type of sketches you write on SNL?

I think all of who I am influences the sketches I write. Sometimes it feels amazing, sometimes it’s nerve wracking, but most of the time it’s both.

Celebrity you’d want to be stranded on a desert island with?

If you could play any role, regardless of gender or race, what would it be?

Batman. He’s just the shit. Smooth as hell. He never gets old like James Bond.

Advice for up and coming queer performers?

Be yourself, which is lame but like hella true. That, and work harder than you feel is hard.

Worst advice you have ever received?

How do you want to be remembered

As a funny person.

Sam Jay becomes one of the first queer people of color to record a Netflix special on Feb. 22 at the Masquerade, 8 p.m. and 10 p.m. Her album “Donna’s Daughter” on Comedy Central Records. Follow her on Instagram and Twitter.

A version of this interview originally appeared in Q magazine. Read the full issue online below:

Pick up each weekly edition of Q magazine at LGBTQ and queer-friendly venues around Atlanta.