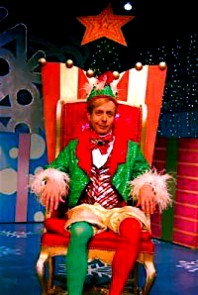 Harold M. Leaver never even had to audition for the gig that has become his signature. He was offered the role of Crumpet in “Santaland Dairies,” opening Friday at Horizon Theatre, because the artistic director thought he’d be a good fit.

Such a good fit, it turns out, that the actor (photos) is now in the 12th year of the mostly one-man show, adapted from David Sedaris’ “Holidays on Ice.” If the masses flock to the Alliance to see “A Christmas Carol,” which also opens Friday, then gay audiences—as well as an increasingly mainstream crowd—eat up “Santaland” each season.

Leaver says that even in its 12th run, keeping it fresh with topical additions is never really an issue. When each year’s team assembles to get started, they are flush with ideas. New this year are some digs at Doogie Howser and election humor, but none directly aimed at Sarah Palin and her family.

“I think the Palins have gotten enough free press,” Leaver says. “What can be said about them that hasn’t already been said?”

Cher is also on the radar.

“I approach doing this like Cher’s Farewell Tour,” Leaver says of the show. “She is still doing it, and if she can do it, why can’t I? I’ll do it as long as it is fun and I’m not too old.”

For most of “Santaland’s” duration, it was directed by openly gay Clint Thornton, but for the last few years it’s been helmed by Jeff Adler, who took the reigns when Thornton chose not to return. The show has kept its gay appeal intact, nonetheless, with Crumpet unapologetically and unabashedly gay.

According to the actor, he never feels totally in place until he is doing the production in front of an audience for the first time. Although the show is scripted, it does give him some leeway each night. He admits that each year, some of the same patrons come back to see the latest incarnation of “Santaland,” and he often teases them.

“Some of them really need to get new sweaters,” Leaver says. Many are also prone to sitting in the back, fearing Crumpet gets a hold of them and brings them onstage.

The crowds are a combination of veterans and those who have never seen the show before. Either way, it doesn’t take long for them to get into the spirit—save for one show at the end of 1999.

“It was just before Y2K, and everyone looked like the world was going to end,” he recalls. “There were some polite hands at the end, but people didn’t laugh at anything.”

According to Leaver, he and Crumpet are not one and the same, but he does have some things in common with Sedaris.

“I look at life like him,” Leaver admits. “When the idea for someone strange comes up, I take it. We are alike in that way. But I am not a multimillionaire, and I don’t have a house in France.”

Doing the show has become a holiday ritual for Leaver, and it remains a challenge, he says.

“I have done a lot of classical theater, but having to be on stage talking for almost the entire time is harder than almost anything I’ve done,” he says.

But he still loves it and appreciates the annual support. “I still don’t get it, but people love seeing me in tights,” he laughs.

To prepare, Leaver keeps his elf shape by “turning down desserts and going to the gym.” He has somehow managed after all the years to wear size small tights.

“The Santaland Diaries” opens at Horizon Theatre on Friday and runs through Jan. 2. For more information and tickets, click the name of the theater or call 404-584-7450.