With beer mugs overflowing with MGD64—and a glass half-full mentality with 64 calories of some “other” beverage—Atlanta’s gay sports bar doesn’t just bring you a party, it’s offering chances on Thursday to win a trip to Key West.

That and many more prizes will be awarded as Woofs teams up with MGD64 and Q100 for a party that not only will keep your glass full of whatever beverage you choose, but let you hobnob with Q100’s resident lesbian and all-round good gal Melissa Carter of the station’s morning stalwart “The Bert Show.”

OK, so it’s not the show’s host Bert Weiss shirtless, but it will still be a blast, Carter says.

“It’s going to be a lot of fun,” she assures. “The station is fully supporting the event, and we’re promoting it on the show.”

In addition to the big prize—a weekend for two in Key West courtesy MGD64—other prizes on the line include a full-year membership to The Forum Athletic Club, along with bar tabs and other sought-after surprise giveaways.

“We’re also going to have MGD specials, concert tickets, and they’re going to do a live feed,” says Woofs’ Aaron Born (top photo, left, with Woofs owner Gary Sisney). “This is the first of four venues for their MDG-Q100 summer promos, and we’re the only gay bar they’re coming to. I’m definitely looking forward to it.” 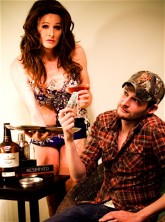 This year, Woofs is backing Atlanta Cotillion debutante Ava VonSeco (Josh Bettis, bottom photo with “Ava”) in his bid for the fundraising crown at the annual AID Atlanta benefit with several parties.

“Josh likes our crowd–the bears, the sports fans–and we felt like this fit right in,” Born says. “He’s a great guy.”

The next “All About Ava” event takes place Friday, June 18.

Coming in July, more Ava fundraisers are joined on the Woofs calendar by Dine Out for Joining Hearts on July 11. That night, 20 percent of your food bill from the big gay kitchen goes directly to the annual HIV/AIDS fundraiser.

“We’re always looking for new ways to have a good time,” Born says.