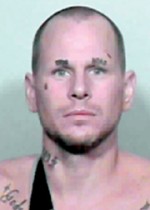 Darrell Lynn Madden, a man described as a skinhead and white supremacist, is heading to trial on charges of kidnapping and first-degree murder in the slaying of a gay Oklahoma man last year.

Prosecutors say the killing of Steven Domer, 62, was part of a gang initiation.

Domer was abducted in a gay neighborhood last October 26. His burned-out car was found the following day and Domer’s body was discovered in a nearby ravine. An autopsy found he had been strangled with a coat hanger.

Investigators then began probing whether anyone known to be gay lived in the area where Domer’s body was found.

That led them to Darrell Lynn Madden, 38, described as bisexual.

Read the full story from 365gay.com.