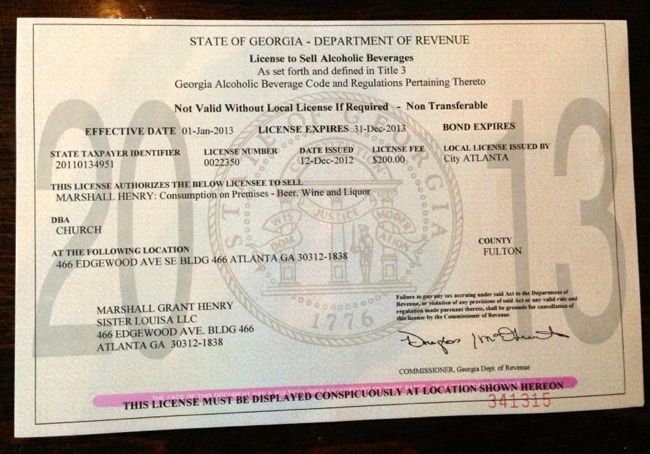 Grant Henry proudly posted a photo of the bar’s 2013 liquor license on Tuesday and borrowed from a gospel song to capture his excitement of successfully navigating the pricey, byzantine licensing process in Atlanta: “This train is bound for glory!!!”

But 2012 at the bar has seen its share of ups and downs. Vandals hit in June, though the parties and Sunday Service never stopped. The latest irritation? A thief swiped Henry’s phone on Dec. 9 as he and a large crowd enjoyed the tunes of DJ Vicki Powell during the Sunday Service Holiday Mixer.

That guy, though, stole the wrong iPhone. Henry pulled video of the snatch from the bar’s security camera, posted it to social media and asked for help in identifying him. He’s persistent. Years ago, he searched for a stolen scooter for three days before finally spotting it on Ponce de Leon Avenue, calling the cops and watching with glee as they arrested the thief.

But even with the video (watch below) and attention from 11Alive and the GA Voice, Henry said Tuesday that the thief hasn’t been nabbed and the phone not recovered. So he leaned on his insurance policy and received a new iPhone on Friday.