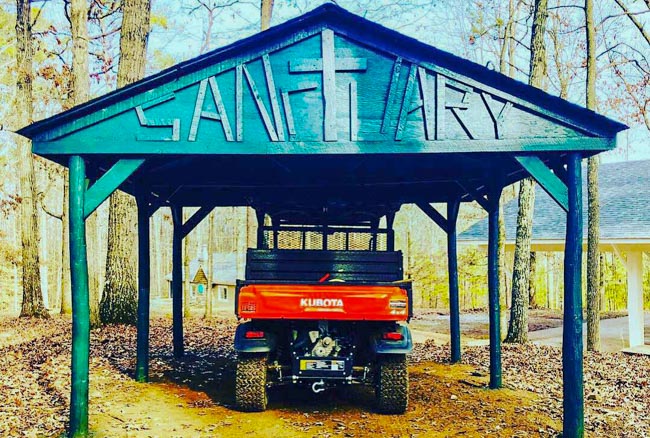 Grant Henry has kept two “churches” thriving, and now he’s adding a Sanctuary — a 44-acre retreat nestled in the woods of Griffin about an hour south of downtown Atlanta.

The irreverent gay owner of the two Sister Louisa’s Church bars in Atlanta and Athens is expanding the brand with this new endeavor that’s unlike anything he’s done before.

“We all need balance in our lives, and being so caught up in the everyday hustle in the big city, just by entering the gates at Sanctuary you breathe a big sigh of relief,” Henry told Project Q Atlanta.

The Atlanta Business Chronicle has more details on the retreat, which he called a “simple and serene” alternative to his bars.

The retreat includes six cabins, a meeting lodge and pavilion. There’s also a lake for swimming and hiking trails Henry carved out himself. He also plans to add an amphitheater and possibly a zip line.

If it seems out of left field, consider Henry’s background.

The project is a natural fit for the 62-year-old, who as a teen spent his summers working as a camp counselor in Florida.

“It was such a fun time,” he said, adding the experience is “why I’m so neurotically on time and responsible … I actually live quite opposite of what Church [bar] is.”

Sanctuary will be host to a variety of events, from weddings to yoga workshops and corporate retreats.

In addition to the upcoming opening of Sanctuary, Henry also launched Sister Louisa’s Annex on Edgewood Avenue a block from Church. That space will be for corporate meetings, holiday parties and other private events.

“Our goal with Sanctuary, Annex, and both Churches is to create safe spaces for people to commune with those they love, as well as provide opportunities for meeting new likeminded, positive people,” Henry told Project Q.