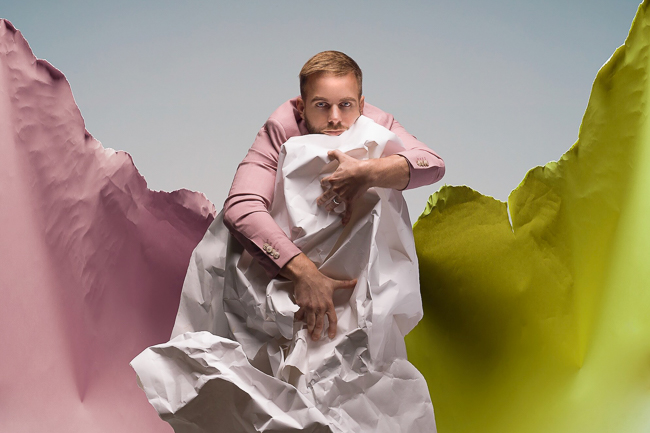 Out singer Tom Goss is making things personal. Well, his music has always been personal, but this time it’s even more heart and soul than he’s already known for.

On the new album “Territories,” Goss opens up about his relationships with both his husband and his boyfriend, and he lays bare some hard queer truths from his real-life struggles in many areas, including pieces about polyamory and domestic violence.

“I’ve written six albums about my husband,” he says. “To write material about intimate thoughts and feelings about someone other than my husband, it was so different.”

The singer-songwriter made time to chat with Q about the new material during his promotional tour for an album he calls “electro-groove-pop.”

This album feels especially revealing and intimate. Is it different than your previous work?

The creation of everything about the album was different. Previously, I wrote by siting with an instrument, a chord, or a chord progression, and I would just spend time with that sound and take inspiration from what I was feeling.

For this album, the stories had to be much more intentional and precise. The subject matter was so different for me, and counter-cultural, that it was important that I really understand what I’m feeling, rather than be “stream of consciousness” with my feelings.

I’m not in your face. I’m not, “This is me, deal with it.” I live and breathe with positive intentions. I had to write in this way as well. I had be thoughtful, careful and intentional.

I approached this album with the lyrics first instead of music first. I had to sit down and think about what those experiences meant and how to articulate what I was going through, so other people would understand and be sympathetic to that. I wanted to connect with people, not alienate people.

What’s been the reaction from fans?

It’s been overwhelmingly positive. I think, as queer people, we are so used to being rejected that we fear rejection. But what we forget is that we are part of a community of people who have faced so much rejection – and have had to do more emotional work in their own lives than maybe some other people – that we work hard to be empathetic, and not reject one another.

I have been grateful by how people have put themselves in my shoes and have understood and accepted my experience.

Tell us about the video for “La Bufadora,” which is about domestic violence.

Michael Serrato is a longtime collaborator of mine and, while I was making the record, he was with me the whole way. He’s been my confidant.

When I finally got things to a point when I was ready for people to hear the songs for the record, I sent them all to him and told him that he had his pick and he chose “La Bufadora.” He started telling me his ideas for the video and I was like “Stop talking, we have to go to Mexico!” [Laughs.] We’re both busy but we were in Mexico 36 hours later scouting for the video.

I had talked to Daniel Franzese over the years, and we had a friendly relationship and conversations about body positivity for big and tall men. I talked about him with Michael and it turns out that we had all wanted to work with one other, so we made it happen.

The thing we want people to take away from this video is that people have a choice. Domestic violence shows up in many forms. It’s complicated. Lives are complicated. It’s not beautiful, or bad, it’s both. We have a choice for how we live our lives and who we want to live our lives with. I hope people watch the video and are inspired by that and decide that they want to be the best version of themselves possible.

Speaking of Daniel, you have some more videos with him coming up.

It’s a trilogy consisting of the songs “Berlin,” “Quebec,” and “Regretting.” Daniel is in “Quebec” and “Regretting.” These three videos tell the story of the album in 12 minutes. I go to Berlin and fall in love. I tell my husband in Quebec and we fall apart. Then, in “Regretting,” we find a way for things to come back together.

“Regretting” is about the pain and the hurt my husband and I inflicted on each other in our relationship and not regretting our time together. I know the pain and hurt go hand in hand with the laugher and love he and I have shared together. And I know the latter outnumber the former 1,000 to one.

What do you hope people will take away from this album?

Ultimately, my music is always about love and truth. I want people to live their truth and love the way that they love.