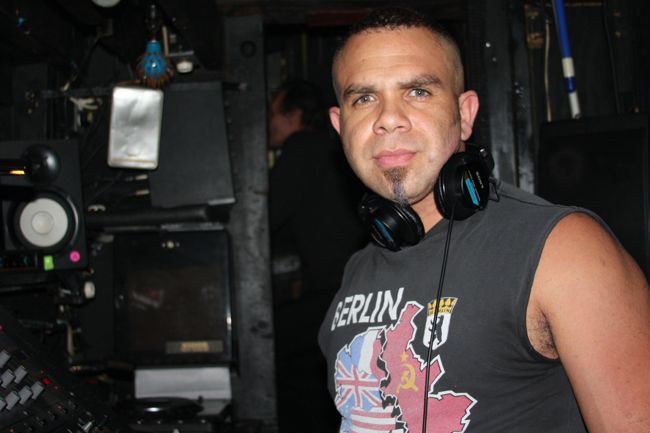 But before his set, the songwriter and music producer dished with us about the event on Wednesday, which benefits Joining Hearts, why he keeps coming back to Atlanta and what the dancing boys can expect.

Welcome back to the A, handsome! What keeps bringing you back?

I love Atlanta. I have a connection there with Alan and Ray, the owners of Heretic, who have always been awesome people. Back when I lived there, I used to play for them at their after-hours club, but God, that was 6 or 7 years ago. We’ve just kept in touch and we built a relationship and I just kept building relationships with more people in the city. I love Atlanta. It's my second home, ya know? It's a good city to visit. I initially moved down there for the wrong reasons; I moved down there for a man. (Laughs) And you know that never works out. Would I return here to live? Absolutely. However, at the moment, NYC is the place for me to be, especially musically.

I just finished the new Mel B. remix for her song “For Once In My Life,” which I will play at Heretic on Thanksgiving Eve. I'm going through something right now, so I can definitely relate to that record. Ya know, it’s all about growing pains. I’m about to be 40 years old, so there are a lot of spiritual things that I’m taking in, and something about that song just kind of touched me. Maybe it was the lyrics, who knows?  I relate to it because when I first moved to Atlanta, I moved for love. That didn’t work out. And I actually just got out of a relationship, so I got used to always being there for this person and they didn't see that. So when the label presented it the song to me, I instantly loved it. I love it because, without sounding selfish, she’s singing about an inner power. I'm so excited to play it. And it’s a big remix, so hopefully you're gonna love it!

What can expect to hear from you on Thanksgiving Eve?

I’m gonna be very honest.  I don't ever ever plan my sets. It’s kind of like my personal rule. I feel like and this is just my outlook on these things, cause I’m really hard on myself, I feel like it’s cheating if you plan your set out. My sets are all about the journey. I start with chill house music, and take you on a trip with underground beats, house music, vocals here and there. I’m definitely going back to my roots. I'll be playing some commercial stuff but it'll all have the signature Sin Morera stamp.

You're going to Japan in December. How exciting! Tell us about that.

This past summer, I did a tour of Asia. I was in Taiwan, Singapore, Beijing, and it was all summer. After that, there was a buzz in Asia that I was an American DJ from NYC. Now, I’ve never been to Japan and they just found out about me. People contacted the club owners and said you need to get this kid. So they got in contact and I was like taken aback, at first. Tours take a toll on you. I was living on airplanes and hotels for two months, it takes a toll on your body. So I didn't think it was gonna be this year but when they said December and that it would be a Christmas special event, I was in. All these different organizations are coming together for this one event and they decided to pick me, so that’s awesome. It’s gonna be pretty intimate, the gig in Tokyo. But I’m excited for it.

Do you have a dream artist DJ that you would just kill to work with?

That’s a tough one. There are so many great artists out these days. I would love to work with Lorde in the studio. I wouldn't wanna remix with her, I would wanna write songs for her. That's where the money is at anyway! I would love to be in the studio with Madonna, of course. I've met her so many times, and she’s always amazing. I haven't seen her in about 8 years though. I met her with my friend Junior Vasquez. I’ve done a remix for her, but I would really love to sit down and write songs for her. And then there's a couple of people on the TV show “X Factor,” like Carlos Guevara, he definitely touched me.

Tell us where we can find you. Grindr? Scruff? Christian Singles?

You can find me on my fan page on Facebook and you can find all my remixes, podcasts and productions on SoundCloud.