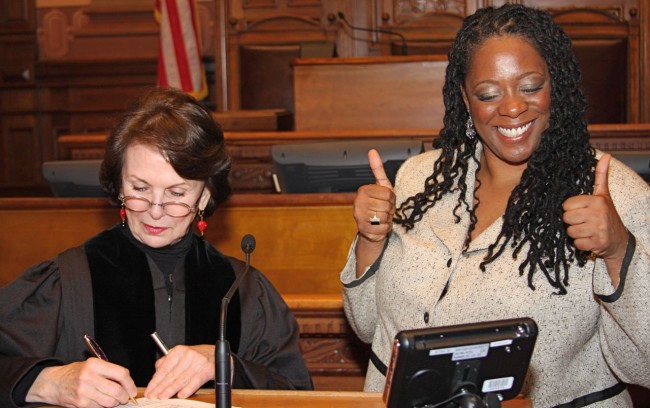 PHOTOS | Simone Bell’s swearing in at the State Capitol 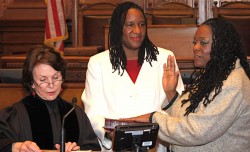 For Bell, the ceremony before friends and supporters in the House chamber at the State Capitol marked the end of a journey she started in August. That’s when she announced plans to run for the District 58 seat in the House and fill the remaining year of Rep. Robin Shipp’s term. Shipp resigned earlier this year. 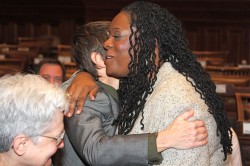 Bell placed second among five candidates in the Nov. 3 special election, putting her in a runoff with Asha Jackson. She thumped Jackson in the Dec. 1 runoff, winning the race 62 to 38 percent and making history in the process. She became the second lesbian in the Georgia General Assembly and the first African-American lesbian to win election to a state legislature in the U.S.

On Tuesday, Bell was often choked with emotion leading up to her oath and swearing in. She warned supporters that she would have little to say after the swearing-in. Hunstein delivered the oath as Bell’s longtime partner, Val Acree, held a Bible between them in a ceremony that lasted about three minutes. As Bell and Hunstein signed paperwork, Bell raised her arms in the air and gave a thumbs up to cheers from the crowd.