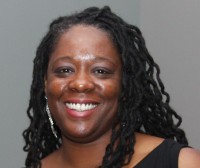 Simone Bell is cranking up her campaign for the District 58 post in the Georgia House.

Bell, a longtime community organizer and lesbian activist, recently picked up the endorsement of the statewide gay rights group Georgia Equality. Now she’s turning her attention to raising the cash she’ll need to fund a campaign in which she has four other challengers. Bell would become the first openly lesbian African American to win election to a state legislature in the U.S.

On Thursday, Bell will be toasted during a reception and fundraiser at the home of Paul Horning, a board member of the Gay & Lesbian Victory Fund and longtime LGBT activist in Atlanta. The Victory Fund endorsed Bell on Aug. 27. On Sept. 15, she formally launches her campaign at Vino Libro in the heart of the legislative district.

Allen Thornell, a longtime LGBT activist, campaigned for the seat in 2006, but lost to Robin Shipp, who resigned earlier this year after winning a second term. Thornell considered jumping into the race again this year, but decided against it in April. He died Aug. 3.

Bell is among at least 12 openly gay candidates seeking office in metro Atlanta this November.

View event details for the Sept. 10 and Sept. 15 fundraisers for Bell.