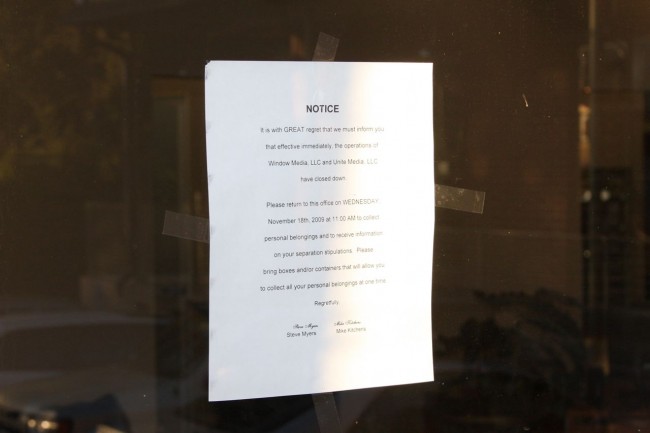 MORE REACTION | Shock, sadness over loss of SoVo and David

With a simple three-sentence notice taped to the door, the publishers of Southern Voice and David magazine ended two decades of gay media in Atlanta on Monday.

The publications, owned along with several others by Window Media and Unite Media, abruptly closed their doors overnight Sunday, ending a months-long battle with federal receivership that imperiled the gay media company. 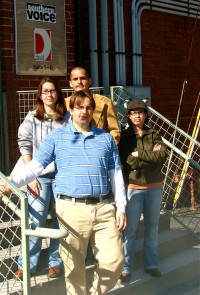 Laura Douglas-Brown, the paper’s editor since 2006 and an employee for nearly 13 years, says the closings are a significant loss for her personally and for metro Atlanta’s LGBT population.

“Of course, I’m personally reeling as is all of the staff,” Douglas-Brown said Monday morning. “What is the most tragic and breaking my heart the most is that this publication that so many people for the last 20 years have put in so much hard work and has received so much support from the community, that it has reached this point.”

Douglas-Brown joined a handful of the company’s nearly two-dozen employees at the offices off Briarcliff Road on Monday. Some employees of the company were told of the closure through a text message from a co-worker about 1 a.m. Monday. Others discovered the news through a three-sentence note taped to the front door of the Atlanta office from Myers and longtime Window executive Mike Kitchens.

It is with GREAT regret that we must inform you that effective immediately, the operations of Window Media, LLC and Unite Media, LLC have closed down.

The websites to Southern Voice and David, which were online early Monday, were shut down by 8:30 a.m. Visitors to the sites received an “unexpected error” message.

Later Monday, Myers confirmed that the five publications, their websites and the web-only Houston Voice, were closed.

“It is a sad, sad day for Window Media and the gay community. Three major newspaper voices are being quieted now for a period of time, along with David and 411,” Myers said. “Right now, it is out of our hands. I would hope something would continue to go on, but I can’t say for certain. It’s been taken our of hands.”

Myers declined further comment about the company’s financial picture and what contributed to its collapse over the weekend.

“We knew about the receivership, obviously, but we had always been led that the way this would end is with the company being sold. I had no inkling and certainly no sign. We were working on Friday night and we were working on Saturday. We just came off of a tremendous Pride. No one knew or thought that this would happen today. Of course people are reeling, but I trust that Steve and Mike did everything in their power to keep it from coming to this point,” Douglas-Brown said.

In Atlanta, the company employed more than two-dozen people.

“The thought of them not being around is very sad,” says Ryan Lee, editor of David and senior reporter for Southern Voice. “I’m incredibly appreciative of being part of both Southern Voice and David and truly believed that we offered an affirmation of gay life in Atlanta and won’t be able to do that anymore.”

Lee was told by a co-worker about 6 a.m. Monday and joined former staffers at the office so they wouldn’t arrive to see the sign posted in the window and with the locks changed. Lee, like Douglas-Brown, has worked for the company his entire professional career. He started at Southern Voice as an intern after graduating from Auburn University.

“It is more surprising than it would have been earlier in the year. Shortly after I became editor [in January 2009], right around that time, the financial struggles had started pressing down and it was a big concern. During the summer, things seemed to turn around – ad pages were up, paychecks were going back to a consistent schedule. So it makes it a little more surprising,” Lee said.

John Nail, the longtime production manager for Southern Voice and David, said he realized the publications might one day close, but held out hope they would continue publishing through this year.

“I have been kind of steeling myself up for this day,” Nail said Monday. “But I thought we could hold out until next year. Things appeared to have been turning around. Ad sales were picking up a little bit. Our Pride issue was down from previous years, but it was better than I expected. That we just get this bomb dropped – there was no inclination this was coming up. Other media have been writing Window Media’s obituary for over a year and we held out longer than anyone predicted.”

Nail worked for the company twice for a total of nearly seven years. But as a graphics artist, he faces both the loss of a job and a profession in an industry that continues to change and downsize.

“It’s not just losing this particular job, but sort of feeling as if I’ve lost my entire livelihood as far as my career choice. It’s not like I can just go to another paper. I’m having to consider a completely new line of work in my 40s,” Nail said.

Nail said he and other co-workers, despite their bracing for the possible shutdown of the company, were surprised to learn of it through a note taped to the office door and media reports.

“I thought we would get some warning that things are breaking down. I am disappointed in the fact that we didn’t get a personal notice, a phone call,” Nail said. “For so many people that worked there, it was more than just a job. It was a calling. We were the gay voice of Atlanta. To just see that disappear — as much as I have been mentally preparing for it for many months, now the day has arrived. Like any death, I am going through all of the various stages. I think I’m alternating between shock, grieving and anger.”

The company struggled with paying freelancers and those financial difficulties later impacted its fulltime employees. Earlier this year, paychecks were often delayed a week or more and payments were staggered among employees, Lee said.

The publications suffered from a steep decline in advertising that impacted the newspaper industry as well as the fallout from a federal receivership. The company lost its CEO in early July among speculation he was forced out by the Small Business Administration.

In April, the paper’s publisher left after a few months on the job in a revolving door that had brought four publishers in about two years. The executive that hired that publisher in 2008 later quit the company, too, but only after folding its national gay glossy Genre.

News broke in February that the company had been in federal receivership since August 2008. The New York-based investment company that owned a majority stake in the publishers of all five gay publications, Avalon Equity Fund, was sued by the SBA, which had the option of selling the media assets as it dissolved the company.

Southern Voice and David join other casualties among Atlanta’s LGBT media offerings. Labrys, a five-year-old Atlanta-based publication for lesbians, ended its monthly print edition earlier this year and shifted to a redesigned website.

“The two company presidents, Steve and Mike, I don’t begrudge them at all in this situation. I know it was a difficult choice for them. I know they did everything humanly possible to keep those operations up. They inherited a situation that was beyond repair,” Lee said.

In praise of Southern Voice and David (Atlanta INtown)

The Final Hours of the Washington Blade (Washington City Paper)