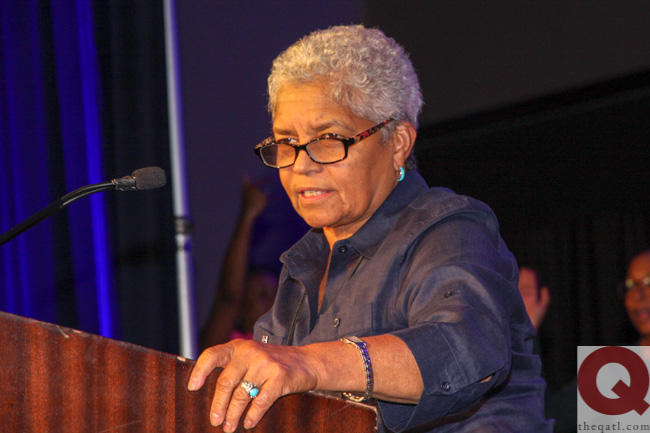 The former Atlanta mayor (top photo) made the comments on Friday during the annual ceremony at the State Capitol.

Kemp was sitting in the front row as Franklin referenced three policies Kemp made central to his campaign, according to the AJC.

“We still debate whether immigrants are welcome in Georgia or should be rounded up by vigilantes. And whether religious freedom means you can legally discriminate against someone. Or whether men should have control of their bodies but women shouldn’t,” she said.

“The human rights challenges of the day are as important as those of years gone by,” she said. “Are we aligned with King, or are we sweeping the hard social, ethical, legal and economic issues of the day under the rug?”

King, Franklin said as she scanned a room full of politicians, was not afraid to “make leaders and everyday people uncomfortable – and we shouldn’t either.”

Then Franklin outlined several issues for Georgia leaders to pursue, including opposition to discriminatory legislation, according to the AJC.

“There is no place for hypocrites in an authentic King celebration. Celebration is fine. Action is better,” said Franklin. “This is a time for true believers in his message – fairness, justice, fair play, transparency, economic opportunity, peace.”

Brian Tolleson, the openly gay interim CEO of the Center for Civil & Human Rights, also spoke during the event. He thanked former Gov. Nathan Deal for “standing on the right side of history” in vetoing a controversial anti-LGBTQ “religious freedom” bill in 2016, according to the AJC.

Chris Clark, president of the Georgia Chamber, told WABE that the legislation could hurt the state’s brand, especially with Super Bowl 53 approaching on Feb. 3.

“With the whole world coming to Atlanta, more cameras than anywhere else in the world, we don’t need to distract,” he said.

Katie Kirkpatrick, chief policy officer for the Atlanta Chamber, told the AJC that lawmakers should focus on legislation that boosts the state’s economy.

“Our team will evaluate legislation as it is introduced and will oppose legislation that is discriminatory in nature or harmful to our ability to create, recruit and retain jobs to protect our state’s top-rated business climate,” she said.

Kemp has vowed to sign a “religious freedom” bill into law that mirrors the federal version. But, House Speaker David Ralston said that the bills are “a solution in search of a problem” and that they could “tear at the fabric of the state.”

That hasn’t stopped some GOP lawmakers from pursuing the legislation anyway.