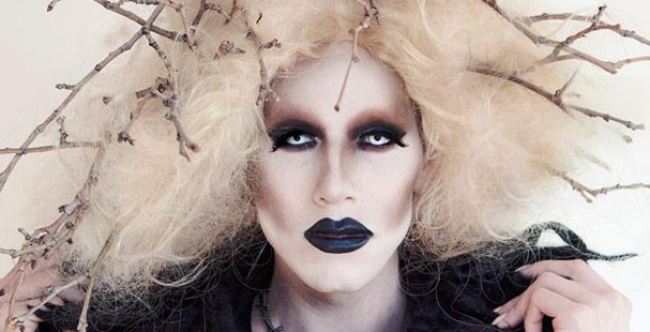 OK, gay “RuPaul’s Drag Race” fanatics. No matter how many Atlanta queens or other show contestants came before or since, the one you can’t stop talking about is back on Friday for the Miss Originality pageant. And Sharon Needles is ready to judge you, bitches.

Our conversation with RuPaul’s most recent, most original Next Drag Superstar stays upbeat and fun – you know, unlike the tears and accusations that last time – as she heads to town for Friday’s Miss Originality contest. The pageant benefits gay Atlanta faves Pets Are Loving Support and Lost N Found Youth.

There’s still time to enter the pageant, but be forewarned, potential contestants: Needles says you betta bring it.

“Hopefully those queens know very well that I know what it takes, and it takes it lot for me to call it ‘Original,’” Needles tells Project Q Atlanta. “But really, I’m the Paula Abdul judge. I smile at everyone and applaud everyone. I respect even the bad drag, in fact it’s my favorite, so everybody gets a shot with me.”

Yes, you loved William, Latrice, Nina Flowers and even Michelle Visage. But after confrontations with protestors, firing back (video) at her haters and delighting gay Atlanta fans despite it all, the Queen of Spooky returns to the scene of drama gone by. So you know, she has been way too busy to focus on past controversy. In short, she’s moved on, Needles says.

“At first, it really hurt and stung, but I don’t care anymore,” she says. “There’s no crash course in dealing with public perception and being famous. Do I wish I had taken a nap before that show and not addressed it? Yes, but the naïve part of me wanted to think common ground could have been reached.”

Now Needles – and her creator Aaron Cody – are focused on real fans of the queen’s take on drag.

“The best therapy I did for myself was stepping outside myself and saying, ‘If I wasn’t Sharon Needles, as a fan I’d love Sharon Needles,’” she says. “I’m going to focus on those people, the people who love me. Other people who don’t get it or don’t want to, that’s their problem.

“That’s the difference between me as a human being and artist and the character of Sharon Needles,” her creator Cody adds. “Sharon is a batshit crazy piece of social commentary who’ll say anything and doesn’t give a shit. I’m learning every day to be more comfortable in my own skin as an entertainer and a famous person.”

Since her last Atlanta stop in June, Needles has starred in two plays, including the role of Frank N’Furter in “The Rocky Horror Picture Show.” In addition to continuing dates on her Every Night is Halloween Tour, she’s the host of Logo’s “Fearce” campy horror movies – “Basically I’m the Elvira of Logo,” Needles says –the face of the latest PETA campaign, and even a fashion model of clothes by Bohemian Society for ODD.

As if all that weren’t enough, Needles’ 12-track album “PG 13,” featuring her creepy ballad rendition of the alt classic “(Everyday is) Halloween,” is due out in January. The album features cameos by Arman Ra, Amanda LePore, Ana Matronic from Scissor Sisters, Atlanta’s own legendary trans rocker Jayne County and of course, RuPaul.

“It’s called ‘PG 13’ like all horror movies so it can be consumed by a larger audience,” Needles says. “This year’s been a very PG 13 year. I’ve had to learn to soften my hard edge to reach more people to get the same message out there: When in doubt, freak them out.”

That’s the plan for Miss Originality. Needles says she’ll sing live – with backing tracks like any good diva – to “Everyday is Halloween” and well, “another track off the album, and it’s a surprise,” she taunts.

Just try and keep up.