One of the jewels at last year’s Out on Film festival was Simon Pearce’s gangland movie, “Shank.” Now that the film is out on DVD, we offer this interview with its talented 21-year old director and its co-writers.

“Shank” is a raw, electric film about an 18-year-old gang member whose life is all about sex, drugs and violence. Unknown to his gang members, he is secretly gay – and he unexpectedly falls for one of his gang’s targets. Wayne Virgo and Marc Laurent (top photo, l-r) are stunning as its stars.

During Out on Film, festival director Jim Farmer conducted this Q & A with “Shank” director Pearce (second photo), writer/editor Darren Flaxstone and co-writer Christian Martin, who produced the film and acts in it as well.

How did you guys get the idea for the film?
Martin: Darren and I got together to discuss a cookery program idea (“Gay Gourmet”), and over dinner a real life anecdote that happened to a friend came up which sparked ideas which then morphed into a treatment followed a month later by a script … The script has woven into the narrative a multitude of real life stories that have been fictionalized to give authenticity to the realism we were seeking.

Simon, it’s very impressive that you were able to direct a film this mature at such a young age – 21. What do you attribute that to? 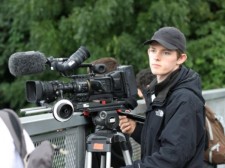 Pearce: I wish I could give you a definitive answer on that one! Perhaps it is because I started young, shooting in-camera movies with my friends when I was 13. With that early interest, I went on to not only watch a lot more films on a wider spectrum than just the recent blockbusters, but also to shoot increasingly more ambitious projects and therefore heighten my awareness of shooting styles and techniques.

Certainly, when I read the script, I was very nervous about doing it and initially questioned whether I would even be able to do so, but ultimately I had been so strongly gripped by the story and characters crafted by Christian and Darren, that I knew, regardless of the mature content, I had had strong enough feelings and responses to the film to be able to translate this on screen in one way or another.

I also of course worked closely with Christian and Darren throughout on their intentions with the script and how they interpreted each scene, so all of this helped in my understanding of the more mature content. It was a very collaborative process.

What’s it been like to present the film in festivals around the world?
Martin: We have been overwhelmed by the response to the film. It is astonishing to us that so many people have been so generous in wanting to screen it and pay good money to see it! To know that people are willing to hear and see what you have to say is incredible.

It’s a tough film, but it’s also tender and sexy, and all the elements that we’ve layered into the film seem to work well with audiences, which tells us that we were right to have been so honest about what we see and what we wanted to show. …

We know it has flaws and is raw but ultimately we believe that we have succeeded in telling a story that is both provocative for a reason and truthful in its execution.

Pearce: Something we were so keen to do with “Shank” was to push the boundaries of gay cinema and to get away from some of the more cliched boy meets boy/girl meets girl love stories that are more often seen, and to show real gay people living real lives for once, and lots of international audiences seem to have recognized this and are grateful for such a fresh approach.

Some programmers have initially approached the film with a little trepidation because of its violent and distressing content in places, but ultimately most have decided that this is still an important film to allow their audience to see and are keen to see the kinds of reaction and debate it will provoke.

This is a film that doesn’t shy away from explicit violence and sex. How did you go about making the film seem so realistic?
Flaxstone: Again, this is down to the use of real events reported or that happened or were experienced by the writers. To convey a greater sense of realism there was much work shopping and rehearsal with the actors—certainly with dialogue and more importantly the sex scenes, which were choreographed to be as realistic as possible by Darren and Christian—positions were demonstrated!

Pearce: We intentionally didn’t shy away from these scenes as I think in society today, as well as in film, particularly gay cinema, there is a tendency to shy away from things that are really happening in the world around us such as this. We may preach tolerance and have new laws promoting equality, but there is still a lot of hostility out there and a lot of people’s individual attitudes haven’t actually changed. This is what we were keen to show … it is a very genuine reality …

[That’s also why] we wanted such a young cast, as they naturally had an understanding of this “world” and in some cases came from similarly rough backgrounds. They all also played a huge part in shaping some of the dialogue from the film so that again this sounded like something a kid on the streets today might actually say.

Finally, it was the reason we wanted to use the verite/documentary approach—shooting the film as if it were captured action, with the camera-man struggling to keep up with the events on-screen, as opposed to shooting something that had been specifically blocked out for camera. The idea of using the mobile phone footage definitely I think was also key to this idea of “captured reality” and helped to give the film such a gritty and raw edge.

The film has so many themes –gender, race, masculinity–and complex relationships. Cal and Olivier don’t initially seem like people who would mix, but they do. What do the two see/get from each other?
Pearce: It’s that classic idea of “opposites attract” I think. Certainly I think Olivier can recognize the good and the innocence that exists in Cal when he comes to pick him up after he is first attacked, and though he may not know it at the time, it is why he ultimately succumbs to getting a lift. There is also that element of danger and mystery to him that he responds to … For Cal, there is certainly an initial physical attraction as there is with both, but again that innocence that is a world away from his life with the gang in which he’s definitely felt uncomfortable for a while now.

Is the happiness they find together by the end ever-lasting?
Martin: It’s not a classic love story, but nonetheless it is a love story! Olivier shows Cal how to love himself and in turn is fascinated by Cal’s impertinence/self esteem, etc. … We wanted Olivier to be the absolute opposite of Jonno – fey, confident, camp versus Jonno’s masculine bravado, size, shape, testosterone driven personality.

Christian/Darren, how difficult is it wearing so many hats in this film?
Flaxstone: It was fascinating being there from inception through to the end as editor. It was the closest I’ll ever get to having a baby! …

The hard work has been worth all the effort, to hear audience reactions to our ideas has been nerve wracking and ultimately wonderful.

Martin: In my previous life as a producer on big budget films, I’ve had the good fortune to have a crew working for me. “Shank” epitomized the ‘hands-on” experience to the letter—literally keeping an eye on everything and exhausting myself in the process—which was greatly satisfying. The end result was like having the best sex ever: the script was the foreplay, the production the stimulation of the erogenous zones and the post production the tense exhilarating path to the best orgasm ever! …

The work obviously hasn’t stopped since completion – it’s been great to have the collective encouragement of Darren and Simon to motivate me to push the film to festivals and markets resulting in the film having been invited to over 38 festivals worldwide and by the end of the year the film will have played to audiences in over 49 cities worldwide…..not bad for a little Brit flick made for less than $25,000!