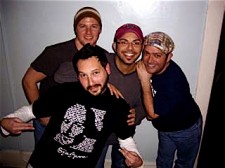 Take 20 of Shakepeare’s most famous and infamous works, turn them on their ear with a modern comic twist in a loungey, interactive atmosphere, and you’re in for a real treat from Odd Man Out Theater Company.

The show opens Friday and Saturday and plays for three consecutive weekends at 10 p.m. The Jan. 22 show benefits Joining Hearts and starts at a special time, 11 p.m.

“I tend to write the scenes that are missing or make a twist on them. Throw in a news broadcast, belly dancing, whatever! It’s crazy, the show is crazy. I can’t wait for people to see it.”

Gray and his cast of four gay men (photo) and five straight women take the sketch comedy format and liberally apply it to characters and scenes you were probably forced to learn in high school. But the hilarious result feels like anything but homework.

“They’re all in short, comedic vignettes, and we use modern language and update the subject matter within the context of the original play,” he says. “You don’t have to know Shakespeare to appreciate the humor, but if you do, you’ll appreciate some of the details.”

Add costumes found through strategic thrift shopping with some creative zsushing that makes them “simply amazing” according to cast and crew, throw a hip venue in the renovated upstairs space at Danneman’s Coffee in the Old Fourth Ward, and mix a dash of BYOB with mixers available, and we may have a cult hit on our hands.

The venue and the show itself are being embraced by the neighborhood as part of an ongoing renaissance in the area.

“The way they have it set it up, it’s a lounge, more like a club feel,” Gray says. “Like a speakeasy, like a ’50s supper club, like a juke joint. Come ready to have a good time.”

Cast member Paul Wolski (photo, center in red hat) says the cast will mingle in their costumes with the audience before, between and after the vignettes.

So let’s review. Some gay cast members (Will Johnston, Hollis Smith and Clark Harris join Wolski and the rest of the ensemble), a gay writer-director, really funny comedy. So it’s gay, right? Well, let’s just say to expect another surprise if your mind was meandering in that direction.

“As a gay person who writes plays—I’m not a gay playwright because other people are doing that—I’m conscious of not falling into the typical gay humor, so I’m not doing camp or cliché,” Gray says. “Maybe I’m reactionary that way. I want the exact opposite of that.

“I can’t just rely on one audience over and over, and the way that I write has a broader appeal with the comedy,” he continues. “I’m all about snappy banter and stuff, but that’s not the only joke.”

Wolski says there may be a gay sensibility innate in a gay person’s sense of humor, but “Shakespeare Follies” is so much more.

“There’s a tone that’s constantly crossing over from gay to straight and back,” he says. “Some gay people will be surprised how they get into the content whether its straight or gay. Funny is funny.”

Gray and Wolski agree that seeing the show is the only way to completely understand the experience.

“This town is used to the Southern Fried comedy, and this show is so fun and so totally unique,” Wolski says. “People are going to come away with, ‘I’m not sure what I just watched, but I can’t wait to tell my friends about it.’”

Gray promises that the proof is in the pudding.

“All I want is for people to come check it out,” he says. “I want to rouse folks—gay, straight, tall, short, guy, girl—and I think we’re going to blow them away with something they’ve never seen before.

“It’s not rigid formulaic anything–even for me,” he adds. “Dress up and get your butt out here. I can’t wait!”

“Shakespeare Follies” runs Fridays and Saturdays through Jan. 30. Check out the Facebook invite, and buy advance tickets ($20) from any cast member or the Danneman’s counter.