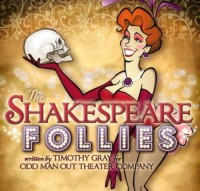 Take some of Shakepeare’s most famous and infamous works, inject them with modern comic twists and an interactive atmosphere, and the return of “Shakespeare Follies” is the theater treat we all deserve beginning Wednesday night.

The show that brought down the house in January’s extended run brings new cast members, new scenes and a charity beneficiary when it returns Wednesday night, this time at 7 Stages. The run continues each night through Sunday’s Mimosa Matineee, and a special Saturday performance benefits CHRIS Kids.

Online ticket sales end Monday night via Odd Man Out Theater Company, but all comers can pay at the door until the fire marshals make them stop selling seats. Hint: If you choose the latter option, arrive early to secure your spot. Tickets are selling out fast.

No matter which night you go, each one promises a loungey vibe that puts the players into the audience in a part mixer, part sketch comedy, all fun update of the show.

“It’s crazy and fun and not to be missed,” says the show’s creator, Timothy Gray. “Every night is a different show because we just have fun with it and see what happens.”

Gray and his cast take the sketch comedy format and liberally apply it to characters and scenes you were probably forced to learn in high school. But the hilarious result feels like anything but homework.

“I tend to write the scenes that are missing or make a twist on them,” Gray told us in January. “Throw in a news broadcast, belly dancing, whatever! It’s crazy, the show is crazy. I can’t wait for people to see it.

“They’re all in short, comedic vignettes, and we use modern language and update the subject matter within the context of the original play,” he says. “You don’t have to know Shakespeare to appreciate the humor, but if you do, you’ll appreciate some of the details.”

Gray and Wolski agree that seeing the show is the only way to completely understand the experience.

“This town is used to the Southern Fried comedy, and this show is so fun and so totally unique,” Wolski says. “People are going to come away with, ‘I’m not sure what I just watched, but I can’t wait to tell my friends about it.’”

But don’t let the troupe or us convince you. Here’s a visual representation to give you an idea of what to expect: