Every gay man in America wants a private show, and Atlanta Pride puts his “All American Boy” gay country goodness on stage during next month’s festival. But what does TV’s Andy Cohen want? Just mix me up some cocktails and look pretty, Steve Grand. OK thanks. 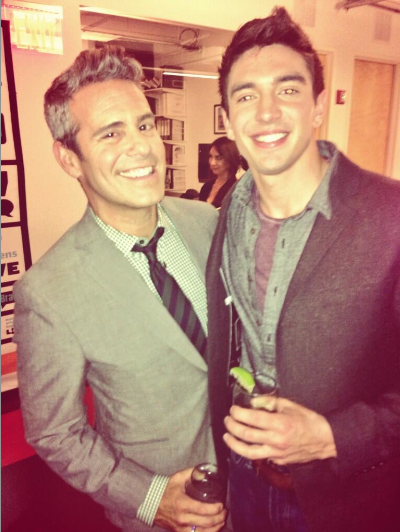 That wasn't a problem for Steve Grand, who's enjoyed national and even international attention this summer. For Wednesday’s episode of “Watch What Happens Live,” Bravo’s head gay tapped the studly country crooner as “guest bartender.” Apparently that means stand there pretending to serve Cohen and the real guests – Suzanne Somers and Nick Carter, ahem. Oh and have as much whiskey as you want while you’re over there.

Grand alerted the world by tweeting a pic (right) with a caption.

"Had so much fun (and whiskey) on @BravoWWHL with Andy Cohen. Thank you for having me!"

We'd have him and have him back, too. Sly, Cohen. We see what you did there.

Still upright after whisky guzzles and having been a good boy the whole show, Grand didn't get to sing but he did get to talk for a minute during the online “After Show” (above). If you're scrolling, about midway through the video Grand talks about making a big gay dent in pop culture.

For once, Cohen’s got nothing on us with this latest finger on the pulse of popularity. We’ve been eyeing Grand’s unbelievably hot body for years. We started watching him even more closely after his internet sensation “All American Boy.” But we stopped pretending and started outright staring and over-analyzing when Pride announced him as an entertainer for the Oct. 12-13 festival. Then he went and released a body-surfing Pride anthem, "Stay." That video is a park plan now, Steve!