Sexy iPhones? You can’t have an app for that 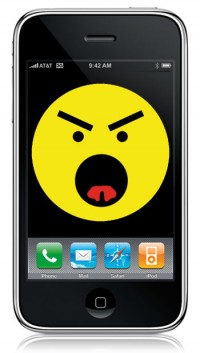 Some guys need more than just our once-a-day Morning Fix of flesh. Passing iPhones with skin pics around the gay dinner table won’t be as easy now that Apple stripped its store of more than 5,000 “overtly sexual” apps.

The scrubbing of the app store for iPhone and iPod Touch began Feb. 17. A week later, the number of offed apps is more than 5,000 and counting.

And the gays are pissed. This from Towleroad:

Our friends over at Hunk du Jour had their app removed. Any other gay apps out there been affected? How long before Grindr goes?

Wait a minute. Not Grindr! As of Thursday, the hookup app that lets you see the gay boys nearest you at any given time is still available at the iPhone app store. For now.

With the continuing sweep over at Apple, even as Grindr’s daddy makes plans for expansion, an iPhone app might not end up as part of Grindr’s master plan for world hookup domination. Grindr announced its landmark 500,000th user on Thursday.

The New York Times had a distinctly hetero, albeit typically thorough, take on the situation. They talked to Apple and got the company’s official PR double-speak version of what’s up.

Philip W. Schiller, head of worldwide product marketing at Apple, said in an interview that over the last few weeks a small number of developers had been submitting “an increasing number of apps containing very objectionable content.”

“It came to the point where we were getting customer complaints from women who found the content getting too degrading and objectionable, as well as parents who were upset with what their kids were able to see,” Mr. Schiller said.

Yeah, because parental controls and parental responsibility are a new concept. Whatever, dude.

But something definitely happened over there. A reported one-third of Apple’s 140,000 apps are adult-themed, so somebody’s morality overshadowed what has to be a vast opportunity cost.

iPhone apps were already showing a gay-straight double standard with approvals for bikini-clad photos of women even as the app patrol nixed some applications for shirtless men. But this is a whole new shitstorm.

There was some talk that Apple had the idea to introduce an option to register and choose an “explicit” category when applying for apps. As of Thursday, those development plans went by the wayside before they ever saw the app store light of day. Guess Apple thought they’d leave dictatorial enough alone.