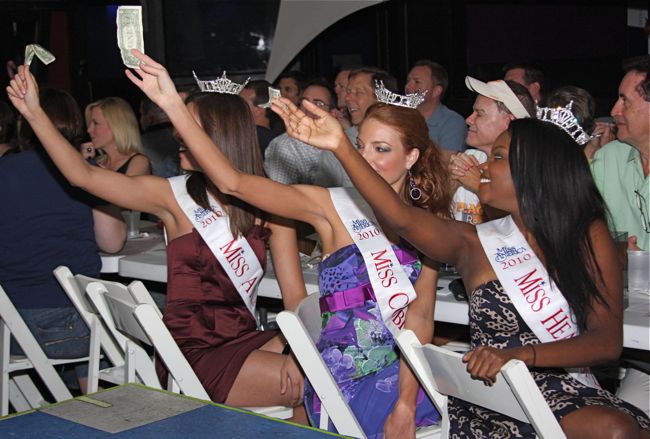 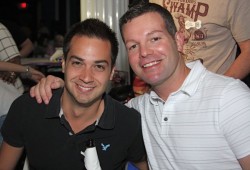 Three beauty queens, several drag queens, a political candidate, an actress and a musician walk into a gay bar. No, seriously, it’s not the start of a Wanda Sykes joke. It happened on Wednesday at a bingo benefit.

The evening turned out to be a big one for Pets Are Loving Support. The non-profit group, which provides vet care and food for the pets of critically-ill Atlantans, holds a popular monthly bingo fundraiser at Jungle. But with a “Sex & the City” theme this month, you know the event had to be as special as gay fans of the franchise hope the sequel will be on opening day later this month. (Get a sneak peek of Samantha’s new stud, Noah Mills, in the Morning Fix.)

Turned out, it was. 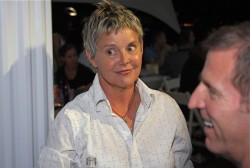 Three beauty queens, including Miss Atlanta Laura Stone and Miss Cobb County Casy Walker, were on hand and doling out tips to Nicole Paige Brooks during her performance (top photo). Co-host Alexandria Martin was sporting a beach outfit circa Samantha in the first “Sex” flick, a new hairdo and a slimmed down figure. Chew on that, Kirstie Alley.

Lesbian actress and director Amanda Bearse (third photo) was present to read the tongue-in-cheek pledge that opens each bingo event. Bearse, a Georgia resident, is well known for her role as Marcy on “Married… with Children” that appeared on Fox between 1987 and 1997. But she’s also visible at LGBT events in Atlanta and is the gal pal of gay celeb couple Richie Arpino and Mitchell Anderson. 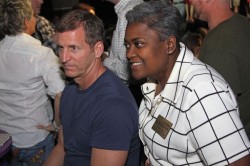 Also in the crowd were local gay musician and songwriter Lucas Miré and Shelitha Robertson (bottom photo), an attorney who mounted an unsuccessful campaign last year for the Atlanta City Council. Now she’s campaigning to become a Fulton County Superior Court judge. Robertson was credited with convincing an Atlanta judge to set bail for the eight men arrested in the Atlanta Eagle raid last September.

Earlier this month, PALS crowned its spokespet for 2010 during the Pet Cotillion fundraiser that helped raise more than $13,000.

Next up for PALS: “Urban Cowboy Bingo” on June 9.