Sex in a bar?: OK for ‘drunk-ass adults’ 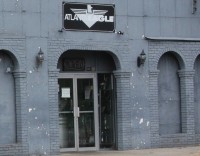 Two out of three adults in Atlanta say it’s OK to have sex in a bar, preferably in the bathroom and probably only if you’re drunk. Too bad the Atlanta Police Department doesn’t agree.

That unscientific poll of adults comes courtesy of Creative Loafing and after the Sept. 10 raid at the Eagle that resulted in eight arrests, two protests, calls from elected officials and political candidates for an investigation into police tactics and a public flap over grand marshals for the upcoming Pride parade.

In it’s weekly Streetalk, the Loaf poses this question: Should cops ever arrest anyone for having sex at a bar?

The responses mostly include what you’d expect from urban-living adults: Yeah, I’ve done it, the bathroom is perfect and if you get caught, expect to get asked to zip up and leave. There was also this: “Why would you want to have sex in a bar? It’s nasty.”

The police department apparently doesn’t agree, thinking that it takes 21 cops — some dressed in paramilitary gear — to investigate a couple of allegations of sexual conduct at the Eagle.

Our favorite quip to the Loaf:

I’ve had sex in a club before. In the bathroom. I mean, hey, we did it, it was fun, I took care of what I needed to take care of. I’d do it again.