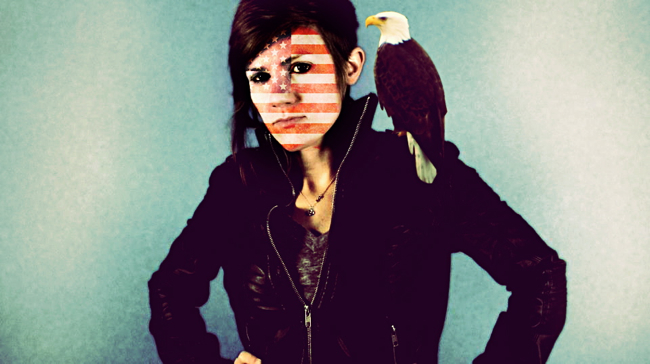 Cameron Esposito has been declared “the future of comedy.” She is a fighter pilot, a vision in denim and whip smart. The lesbian comic brings her hilarious comedy and distinct take on gay culture to Atlanta this weekend.

She sat down in advance of her Thursday-through-Sunday shows at Laughing Skull Lounge to talk comedy, queer politics, sad airport salads and how she is actually the “Now of Comedy.” Check out her answers on all things comedy and queerness, and see why she says that being yourself and telling your own stories can be the most political statement you can make.

Is this your first time in Atlanta?
Yes, this is my first time. I have never even been to Atlanta, let alone to perform. Though I was scheduled to be at the Laughing Skull this past fall but had to cancel because I lost my voice! I hope everyone who had planned to make that show will come out this weekend.

Who were comedic role models, both famous and non famous?
I started stand-up in Chicago and comedy is kind of in classes, so when I was a “freshman” comedian, the senior class of comedians are now doing really well for themselves nationally, like Hannibal Burress, TJ Miller or Kumail Nanjiani.

A lot of those folks may be new names to your readers but they are all just exploding and will just continue to grow. These were great comics to come up as a comedian watching because when I was starting they were having their first breaks. They’d be in Chicago but then the next night they would be on Letterman, so it has been great to watch those guys from the Chicago scene and sort of tract their success and how it’s done.

Of course, who isn’t a lesbian comic that didn’t watch Ellen DeGeneres’s comedy? There probably isn’t any.

Your twitter description is ‘Comic. Denim. Terminator.’ Can you elaborate?
Those are the important things to know about me. I’m a Comic first. When you do this job, it becomes one of your major descriptors because it is huge part of your world view.

Denim. I am definitely known for denim inside and out. It is not only what I wear but for the particular gender I am, which I qualify as “fighter pilot” (laughs), that is my gender.

I do think gay culture has been around long enough where it is no longer completely outside the main culture. When I see (straight) girls with the same haircut as me, I think it is hilarious because they probably don’t know they have a gay haircut, they just think it’s cool. Gay people are no longer appropriating straight culture. I think the hip straight people are now appropriating gay culture now. And one of those things is the old “Jean Jack”

When did you know you were funny and could make people laugh?
Any comic has a moment in their life that they used humor to distract people from or to mitigate. Not only was I a little gay kid growing up in the summer, but I also had crossed eyes and I had to wear an eye patch for 8 years of my childhood.

I believe that comics are functional human beings, but I believe that for all of us there is a moment or event in their life where they had to decide “Either, I get out in front of this joke and control it or I am going to be bludgeoned by those jokes by people around me.”

Is it more empowering to speak in your own voice in stand up, or is there more freedom in character work?
I started in improv in high school and college, but being a woman and being a gay woman, it became more important to me to speak from a first person point of view. I started doing improv 13 years ago, so if you think about all the things that have happened in the last 13 years regarding gay culture and politics, gay rights and equality have been such a big part of the national conversation.

I kept being at shows where people would hint at that or discuss how they felt about it, and these were all straight people and mostly male and I really felt that I needed to be addressing from a first person narrative. I kept feeling like this was being discussed around me and I had to contribute my view to this conversation through my act.

Kate Clinton has said that just saying you were a lesbian on stage in the ‘80s was a political act. Has that changed?
I think that is absolutely still true. I find that often even if a straight comedian who is a gay ally may speak on a topic like marriage equality, that they do so in a way that acts like there are no gay people in the room. So it feels like straight people talking to straight people almost saying, “We should be OK with this.”

While I appreciate that, the fact of the matter is gay people are everywhere and they are in every audience, so I think that is another reason to speak from the first person and my own experience, because I speak to the straight people and gay people I assume are in the audience. It’s the same as a woman comic not having to speak as if there were only men in the audience. When you are part of the majority, it is really easy to forget that you a part of the majority and you forget that ho you experience the world is not how others experience it.

Do you think there is a shared queer comedic sensibility?
I don’t know about that. In terms of comedy sensibility, I would put myself under the umbrella of alternative comic, not alternative sexuality. Alternative comics do more storytelling and more prone to be performing at a rock club or nontraditional venues.

The big name in that would be like a Maria Bamford. It is the opposite of the ‘80s movement of comedy, all that Seinfeld, brick walls and shoulder pads stuff. I actually find that there actually very few gay comics in the same scenes that I am in. It’s like, me and James Adomian.

Any advice for up and coming LGBT comedians or actors?
I’ll speak specifically to stand up. Something you get asked a lot is “How did you get started?” and the answer is you just start doing it. A lot of people wait for some external influence or sign that they should do it but all ittakesisthewilltogoforit.

For gay and women performers, when you first start out going to open mics you may feel a little bit on the outside of this group of mostly straight men, but the reality is that most of these people have insecurities and you have more in common than you think.

If you are at a show and somebodies says something you don’t like about gays or women, know that will be eventually phased out. Nobody is making long and lucrative careers out of sexist or homophobic jokes. … You just have to keep your head down and focus on what you are there for, which is yourself and your development as a comedian.

How would you describe the “Put Your Hands Together” podcast to a newbie?
It is the closest you can get to experiencing an alternative stand up showcase in Los Angeles without being there. We are really trying to recreate the shows here for the podcast listener.

What’s cool about LA is that all these successful comics just live here because they are writing for television or acting or in between touring. They are willing to come to UCB on a Tuesday night to play. Instead of seeing one comic for an hour in Atlanta, you get seven minutes from several comics, and you can pick and choose a new favorite.

Your appearance on Craig Ferguson last fall was amazing (video above). Jay Leno responded that “White men are on their way out! Lesbians rule!” Ferguson concurred and called you and your peers “the future of comedy.” What do you think?
I think they low-balled it, I am the “Now of Comedy” (laughs). When I was growing up, before Ellen was out on television, I didn’t know any lesbians or have a role model. I remember when I walked off stage thinking “there is somebody out there that will see this performance and it will inspire them to follow their dream.”

In reference to Michael Douglas winning an award for portraying Librace and Jared Leto winning for his portrayal of a trans person, you said “We need queer actors playing queer roles and winning awards based on performance, not just the bravery of acting queer.” Can you elaborate?
When Hilary Swank won an Oscar for “Boys Don’t Cry” in 1999, that was groundbreaking. At that time, Queer people needed somebody with that much Hollywood pull to play a very believable trans man and really get into the role and have it be a very sympathetic and beautiful movie.

When Jared Leto won his award this year, it felt like “Have we made any progress?” It is still a story about a trans person that is suffering and still a story of a trans person who doesn’t accept themselves. In the 14 years between “Boys Don’t Cry” and the 21 years since Tom Hanks’s portrayal of a gay men with AIDS, here is “Dallas Buyers Club” and now we are giving oscars to people who portray characters who act like homophobes?

I can’t help feeling there is no movement there. At the same time, I have to feel moderately encouraged by somebody like Laverne Cox who is very talented as an actor and very beautiful and sharing her story and doing great work in television. So there is hope and we have had change but at times it feels like a time warp occurs. I just feel like the rest of the country and the entertainment industry really need to catch with where Laverne Cox is.

Ellen is on daytime television using the word “wife.” That’s where we are, and there is no going back now. Just forward. I want our success stories to be told.

If 13 year old you could see you now, what would she say?
I think everything about my life would be a surprise to 13 year old me. Then I would have assumed I would still live in Chicago and be married to a guy, though no clue on how that would have looked. I think she would be proud of me.

What question are you never asked in interviews?
No one ever asks how you maintain a career in stand up once you start. And it is a grind at times. Nobody knows that I wear the same outfit all the time because I am in different cities or how much time you spend alone in your hotel or how many sad airport salads you end up eating because you eat bad all weekend. A lot more airport salads than you’d expect. Also, you’ll spend a lot of time in Hotel fitness centers, sometimes just slow walking just to feel like a person.

Cameron Esposito is at Laughing Skull Lounge Thursday April 3 through Sunday April 6. Gay Atlanta’s Ian Aber hosts the April 3 and 4 shows. Catch her podcasts “Wham Bam Pow” and “Put Your Hands Together” on iTunes or her website.