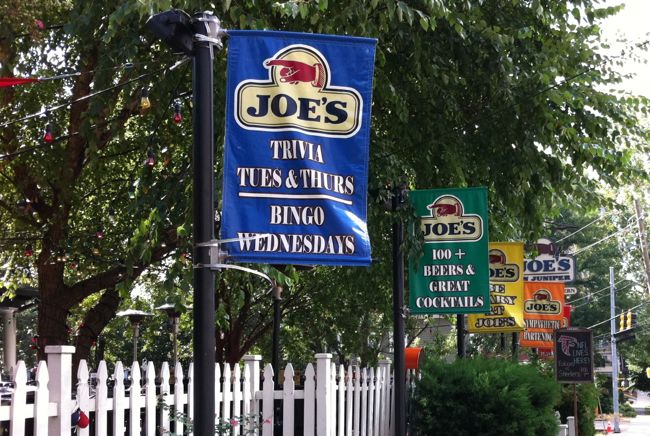 Seven current and former servers at gay popular Joe’s on Juniper sued the restaurant in federal court, alleging that they weren’t paid minimum wage and overtime and that the eatery violated federal labor laws.

The servers – Ryan Washington, Ian Ingram, Tatyana Brown, Michael Shurden, Joseph Carty, Tommy Woodall and Taylor Cox – sued Metrotainment Cafes and Political Concepts, which owns Joe’s, along with CEO and owner Jeffrey and Amy Landau, the company’s registered agent, in federal court. The 12-page lawsuit alleges that the restaurant required the servers to work hours off the clock, work more than 40 hours per week, perform duties outside of directly dealing with customers and were forced to contribute to a tip pool that compensated employees who didn’t receive tips, which is prohibited by federal law.

The lawsuit also argues that Joe’s paid the servers $2.13 per hour and claimed a tip credit to offset the difference between that hourly rate and the minimum wage rate of $7.25 per hour without notifying the employees, which is a violation of the Fair Labor Standards Act. In turn, the lawsuit contends, the restaurant should pay the servers $7.25 per hour and overtime, damages and attorney’s fees.

The lawsuit was filed Sept. 8 by Washington, Ingram and Brown, who worked at the restaurant between September 2011 and when the suit was filed; other plaintiffs, including at least one who still works at Joe’s, were added later. The GA Voice first reported the lawsuit on Monday.

The lawsuit, filed by Mays & Kerr, seeks collective action status, which if granted, would open it to other servers and tipped employees at the restaurant if they opt into the legal proceedings.

“For most of my employment at Joe’s, I regularly worked in excess of 40 hours per week, and often as much as 60 to 70 hours per week,” Washington, a former server at Joe’s, says in an Oct. 4 court filing. “I often worked 10- to 18-hour shifts four or five days a week.”

In addition to waiting on customers, Washington says he was ordered to change kegs, clean, sweep, dust, set out chairs and blow leaves off the patio.

Declarations from other servers in the lawsuit include similar allegations.

Documents filed with the lawsuit show that the attorneys for the servers, Mays & Kerr, will receive either 40 percent of any settlement or their actual fees, whichever is greater.

In its response, the restaurant argued in a brief filed Nov. 3 by Bloom, Sugarman, Everett that the servers were compensated correctly and were paid for work above 40 hours per week. It also said that the claims were brought in “bad faith, lack evidentiary support or are interposed for improper purposes.”

The restaurant also fired back at attempts to broaden the lawsuit into a collective action.

“A closer review of Plaintiffs’ allegations reveals that Plaintiffs cannot make the requisite showing for a collective action, even at this early, conditional, ‘notice’ stage. Simply put, there is no common unlawful policy or practice that places Plaintiff and the purported class in a similar situation, either with respect to their hourly wages or overtime compensation,” according to the legal filing.

In a Nov. 4 court brief, attorneys for the restaurant argued that Joe’s can claim the tip credit and does inform employees about it, and that it correctly uses a tip pool to compensate only other tipped employees.

“Both of these allegations are plainly false,” according to the filing.

The restaurant’s response also says that it has paid more than 2,500 hours of overtime to serves in the last three years, including more than 300 hours to the servers now suing them.

In July, Joe’s announced a renovation that would take over nearby space and double its indoor dining space. In June 2013, the restaurant and Metrotainment filed bankruptcy. The restaurant suffered through that health inspection scare in 2011.