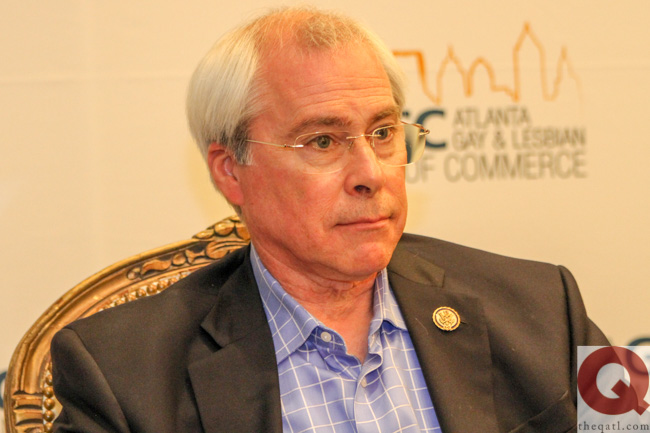 John Barrow, a Democrat running to become Georgia Secretary of State, opened up about why he says “religious freedom” bills are discriminatory and his support of marriage equality after voting to ban it while in Congress in the mid-1990s.

The Athens native and former five-term member of Congress showed his evolution on LGBTQ issues during a panel discussion in June hosted by the Atlanta Gay & Lesbian Chamber of Commerce. That's when Barrow said he supported a statewide LGBTQ-inclusive non-discrimination law and opposed anti-LGBTQ “religious freedom” bills.

In a recent interview, Barrow said he supported people associating and worshiping as they see fit.

“And I don’t look at the places of business in the general commerce as being places where folks can practice their religious beliefs in such a way as to discriminate against some customers and in favor of others,” he added.

Barrow said he doesn't buy the arguments of conservative lawmakers in Georgia who argue that they only want to pass a “religious freedom” law that mirrors the federal Religious Freedom Restoration Act.

Barrow said the federal law “is something that started out as a mere repetition of what the First Amendment already guarantees, but it was quickly seized on by folks as a vehicle to expand the sphere of places where folks can discriminate.”

From yes on DOMA to yes on gay marriage

Barrow’s support last month for a statewide non-discrimination bill that covers employment, housing and public accommodations was a dramatic change from his position in 2014, when as a House member running for re-election he refused to co-sponsor the Employment Non-Discrimination Act. The legislation would have prohibited employment discrimination based on sexual orientation and gender identity. Barrow was one of only eight Democrats in the U.S. House to refuse to sponsor the bill.

Barrow chalked his vote up to a complicated legislative process and said the bill wasn’t ready to be passed in its form at the time of the vote.

“Voting on something when it’s been through the entire process and it’s either going to pass or not going to pass but it has had all the vetting and all the compromises and all of the common sense exceptions added in that you get through the legislative process, that’s one thing,” he said, saying that’s what he did for his votes in favor of the Matthew Shepard Hate Crimes Act and to repeal the “Don’t Ask, Don’t Tell” ban on LGBT people serving openly in the military.

“You can’t say that about a bill that is being sponsored by somebody that hasn’t been through the vetting process yet,” he added. “And as it turns out, it was rejected by large elements of the community precisely because it wasn’t in a form that was ready to be adopted yet.”

Barrow also voted to uphold the Defense of Marriage Act, which defined marriage as the union of one man and one woman. It’s actions like those that led the Human Rights Campaign to routinely score the former congressman on par with his Republican counterparts in Georgia on the organization’s Congressional Scorecard.

Barrow said he now supports same-sex marriage, and that he supported civil unions as a viable alternative at the time.

“I’ve always believed that the law should treat people equally when it comes to providing benefits or classification of people for some government purpose,” he said. “When the government’s going to classify folks, they have to give people the right to participate on equal terms.

“The marriage equality decision guarantees that right but it doesn’t decide a lot of issues as you can see. That’s what RFRA is about. We’re dealing with all of the issues that will come from that,” he added.

The winner of the general election will succeed Secretary of State Brian Kemp, who is in a GOP primary runoff against Lt. Gov. Casey Cagle for governor.