Welcome to the first edition of Wonder Geeks, your semi-regular guide to all things gay and geeky. We’ll be sharing what’s hot in the world of comics, video games, action figures—you know, anything geeky—and here’s why:

It all started when we looked around and realized we weren’t the only homos in the comic shop. Rather than create a gaping void around us as boys flee whenever we start discussing the latest Green Lantern issue, we would actually accumulate a decently sizable group of gays who seemed to know what we were talking about.

It’s earned us a network of geeky gay friends—and occasionally gotten us laid (because geekspeak makes great pillow talk, apparently)—so we figured why the hell not blog about it? And did you see all the gays and alternaqueers at Dragon*Con last weekend? It’s like we ran the place! Although, that shouldn’t be a surprise, what with all the costuming, creativity and glitter that goes into that convention. They may as well call it geek homo pride. Anyways…

In future columns, we’ll have some reviews of recent comics for you. First up though, we’ll mostly be giving you an overview of the two biggest comics publishers and highlighting their (thankfully) well-handled gay characters.

We’ll start with the Big Two: DC Comics and Marvel Comics. To be fair, we’re well aware of all the other small house publishers and popular niche genres (horror, Manga, etc. … yawn), but we’ll be sticking to more mainstream books. And although up until now we’ve been speaking as one—and you thought the Stepford Cuckoos would never be outgayed—Rob’s going to tackle DC, and Jay’ll give you the lowdown on Marvel.

DC Comics: Even if you know next to nothing about comics, you’ll most likely recognize some of DC’s characters. The originator of the superhero genre and the place to find the biggest icons in the biz – Superman, Batman, and Wonder Woman–DC is the place to find big stories and is the closest we have to modern-day mythology.

While ongoing continuity is frequently convoluted as all hell, DC is where you’ll find the characters you loved as a kid from the classic “Super Friends” cartoon. If you haven’t been following along in the past 10 years though, you likely won’t know what the hell half of them are talking about.

DC is fresh off the rush of “Blackest Night” and well into its nostalgia-laced sequel “Brightest Day,” the latest Geoff Johns-helmed events. I firmly believe that everything good that has happened lately at DC—save some tough-to-swallow dialog—has been thanks to Johns and in spite of the efforts of current editor-in-chief Dan DiDio. 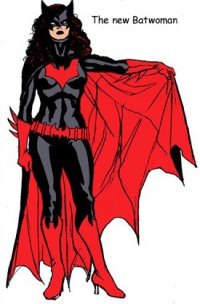 On the gay front, DC has long handled gay characters fairly well, especially those of the lesbian variety. Superman worked closely with a lesbian cop Maggie Sawyer back in the ‘90s. She later moved to Gotham City and eventually became the boss of Renee Montoya, another lesbo-po-po who later became the latest incarnation of the superhero known as the Question.

Montoya then became romantically involved with Batwoman (second photo), the DC-described “lipstick lesbian” addition to the Bat Family who is set to get her own series, scripted and at least partially drawn by J.H. Williams III. His stellar artwork on the Greg Rucka-scripted Detective Comics run featuring Batwoman can be found in the new hardcover, “Elegy.” We highly recommend checking it out, due not only to its gorgeous artwork and deft storytelling, but also to the timeliness of the revelation that Batwoman, aka Kate Kane, was discharged from the military as a cadet for admitting she’s a lesbian.

Marvel Comics: The industry leader, Marvel is home to Spider-Man, the X-Men, Hulk, Iron Man and a host of other hot properties. If you’ve seen a super hero movie in the last couple of years, chances are it was based on a Marvel hero. Hugh Jackman as Wolverine anyone? Yum!

The Marvel Universe has just entered the “Heroic Age,” and at the center of it all is Marvel’s number one super team: The Avengers.

Over the last few years, we’ve had New Avengers, Mighty Avengers, Young Avengers, Dark Avengers, and countless one-shots and special appearances throughout other Marvel books, all available now in collected editions. The Avengers books have consistently been my favorite, thanks to snappy dialogue, great storytelling, and a fun mix of characters. It seems that a lot of readers agree with me: Avengers has surpassed the venerable X-Men as Marvel’s number one franchise.

Marvel is pimping out the Avengers like never before, launching four ongoing new books back in May. Are these new titles worth reading? It’s a little hit and miss. I’ll give you a rundown in an upcoming column, but for now, let’s focus on Young Avengers.

Marvel has always portrayed its characters current with the times, giving readers plenty to identify with. Spider-Man’s alter ego Peter Parker is a little on the nerdy side and struggles to fit in, and The X-Men deal with intolerance and bigotry because they were born genetically different. Ring a bell, gay fans?

So it comes as no surprise that Marvel would feature a young gay couple in the hit Young Avengers stories. Wiccan (bottom photo, left)—think Thor, but younger and, well, gayer—and Hulkling (bottom photo, right), a shape-shifting green-skinned jock, have been an item since it was revealed that the two were dating back in the original Young Avengers series, written by Allan Heinberg of “Sex And The City” fame. In fact, Wiccan was originally known as “Asgardian” and, in a truly LOL moment, one of the other Young Avengers mentions that a name change is order before the media picks up on the fact that these two guys are a couple. Ha!

Before Wiccan and Hulkling, Marvel blazed the trail of gay superheroes back in the ‘80s with Northstar, one of the first openly gay heroes. Northstar later joined the X-Men, who are themselves often perceived as an allegory for the struggle for gay equality.

Finally, one surprising entrant into the world of gays comic characters is Archie Comics. September’s “Veronica #202” debuted Kevin Keller, the first gay—well, openly gay, anyway, because we’ve all had our doubts about Reggie—resident of Riverdale. The story portrays Veronica swooning over Kevin, the hot new kid in town who can out-eat Jughead, and as a result, befriends his fellow foodie.

Basically everyone but V knows Kevin’s a big ‘mo and is totally cool with it, and the revelation is surprisingly clever and actually funny. Nevermind that the issue ends with Kevin jetting off to the mall with newly-minted faghag Veronica. What gay worth his own wool would pass up the chance of a shopping spree with Veronica Lodge’s insane credit limit? Well done, Archie Comics.

Next up, we’ll actually review some stuff. And wtf is up with Wonder Woman ditching her star-spangled panties for pants? Not to worry, gay comics fans, we’ll get to that soon. Hope to see you here next time.