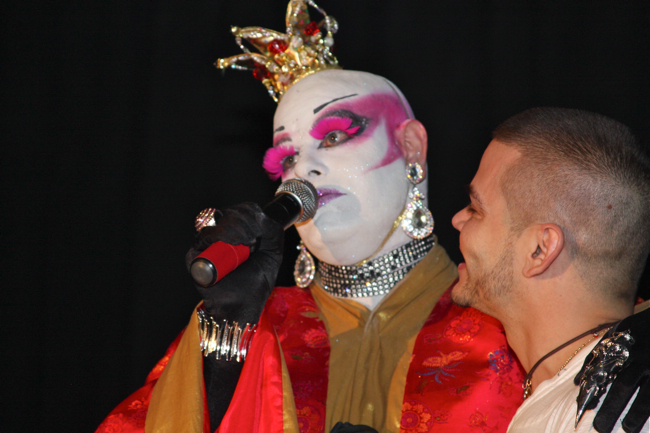 What better way to prepare for Friday’s next installment of Dragnique than to catch up on what happened last week in the reality-style drag race? Guest judges, a great show and a willing audience made it memorable, and we have the photos to prove it.

Hostess with the mostest Eve Michaels (top photo) went wigless in a Kabuki look and ushered the competition forward with the help of Head Judge Nicole Paige Brooks and guest judges Amber Divine and Wild Cherry Sucret (third photo)—looking really good for back from the dead, er, retirement. Divine and Sucret donated the proceeds from the show to benefit the charity fundraising of their alma mater, the Armorettes.

The debut of the seven-week showdown packed the house at Jungle with its Drag On A Dime Challenge. Week 2 saw a slightly smaller crowd as Snowpocalype began to melt, but they were just as enthusiastic. The remaining six contestants took on the Celebrity Impersonation challenge with gusto.

Gunza Blazin became the crowd favorite in Week 2, and as the reality of the reality-style competition set in, the crowd said goodbye to Pasha Nicole (bottom photo).

That means just five girls are left with eyes firmly set on becoming Atlanta’s next big drag star. Week 3 on Friday will see the “Androgyny Rock-N-Roll” challenge. Which contestants will bring it, and which one will be sent packing?

Guest judges this week are Jasmine Antoinette and Princess Charles, who’ll collect the tips from the show and donate them to CHRIS Kids.