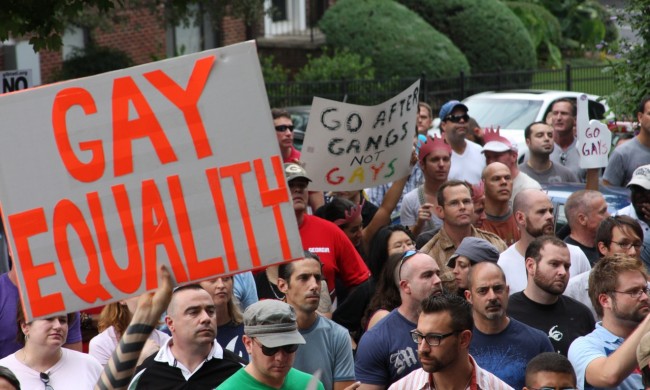 Plans for another LGBT rally against the Sept. 10 police raid at the Atlanta Eagle are now set. Protesters will gather from noon to 3 p.m. Saturday, Sept. 19, on the steps of City Hall downtown, according to organizers. More information can be found on the group’s Facebook page.

Laura Gentle, one of the organizers of the first protest on Sept. 13, told Project Q on Tuesday that permits for the second rally were being considered for City Hall and the state capitol building. City Hall was the preferred location because it “addresses our concerns on a local level,” she says.

“This type of civil liberties violation will not be tolerated by residents in the City of Atlanta,” she adds. “The mission is to publicly demonstrate the vast number of Atlantans who believe the severity of the raid represents concerns not just for the LGBTQ community, but a greater threat to all communities of Atlanta.”

Widespread outrage prompted the second rally after Atlanta police said that undercover officers observed sexual activity at the Eagle on two previous operations, though not on the night of the raid. A co-owner of the Eagle disputes those allegations.

“The community response has been enormous that we need to stay on top of this story and keep the community momentum going strong,” Gentle says.

Gentle adds today that signatures will be collected during the Saturday rally in support of keeping up the investigation into allegations against police. She says the petition will be presented to Atlanta City Council President Lisa Borders at the Sept. 21 council meeting as “an official record” of citizen commitment to the issue. Borders, who is running for Mayor of Atlanta, has joined other candidates in City races in calling for an investigation into police conduct on the night of the raid.

“Our message is simple: ‘This far and no further,'” Gentle says of the protests. “What happened at the Eagle stops here and now. The Atlanta community at large will not stand for escalation of raids on any venue without substantiated complaints and proper protocol in carrying out investigations and, if warranted, justified arrests.”