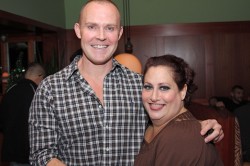 The cast of “Scrooge in Rouge” capped the premiere of their four-week Atlanta run with an opening night reception Thursday that offered the chance to schmooze with Varla Jean Merman and other actors.

Jeffrey Roberson, decidedly dressed down and out of the campy outfits that make Merman, joined cast members Ricky Graham and Yvette Hargis and other staffers from the show for the reception at Einstein’s, just south on Juniper Street from where the show’s home at the 14th Street Playhouse. 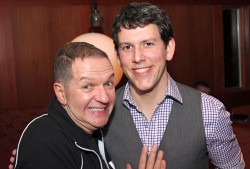 “Scrooge in Rouge” is set in 1843, the same year Charles Dickens published “A Christmas Carol” that helps inspire this riff on a musical melodrama. Fast-forward to a tatty theater in England where the 20-member cast falls victim to food poisoning as they prepare to stage “A Christmas Carol.” But the show must go on, so the three cast members unaffected by illness work hard to deliver. Roberson, Graham and Hargis master a myriad of dual gender roles while tackling more than 20 characters. (Read our full preview)

The show runs through Dec. 27 with performances Thursdays through Sundays.

View the Project Q Atlanta photo album from the reception.