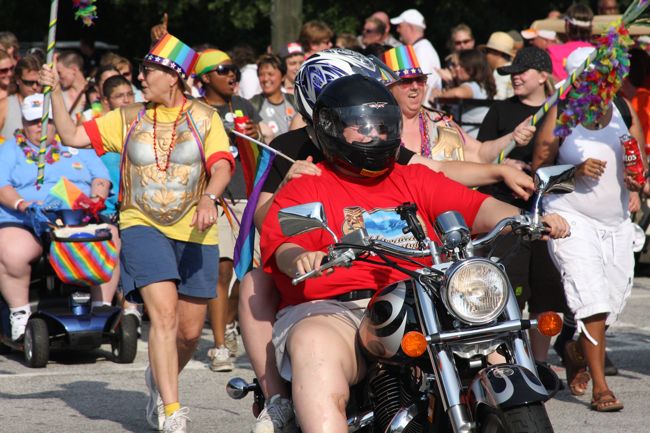 Gee thanks, gays. You, your trio of parades and marches and the big party in the park this weekend are totaling screwing up traffic. Atlanta police offer their own solution.

You see, this weekend is the Atlanta Pride Festival–as if you don’t know that. Duh. But with a trio of marches and parades on Saturday and Sunday, Atlanta police say – we’re paraphrasing here – put your ass on a MARTA train or bus if you’re coming to get your gay on in Piedmont Park.

The police advisory about traffic, though, also makes us chuckle. Why’s that? It nails the title of the Atlanta Pride Parade. But when it comes to the Dyke March – that’s the official name, FYI – the cops call it the “women’s march.” True that, but with bare breasts basking in the sun and dykes on Harleys, it’s so much more. “Dyke” really captures the essence of the event, which steps off Saturday at 6 p.m.

Back to traffic. Here’s the breakdown on the routes, courtesy APD.

The women’s march is scheduled for 6:00 p.m. on Saturday Oct 9th. The route will be from Charles Allen Dr. and 10th St west on 10th St. to Peachtree St. north on Peachtree St. to 14th St., east on 14th and terminate inside Piedmont Park. This event will affect the following streets:

The Atlanta Pride Parade will take place on Sunday, Oct 10th. It will start at 1:00 p.m. and last until approximately 3:00 p.m. The parade route will be from Ralph McGill Blvd and Peachtree St., north on Peachtree to 10th St., east on 10th St. to Piedmont Avenue, north on Piedmont Avenue where it will disband at Piedmont Avenue and 12th St. This event will affect the following streets:

The advisory doesn’t mention the Trans March on Saturday, which steps off at 1:30 p.m.

To help fellow officers – and Pride-goers – sort through all that is Pride Weekend, Atlanta police are also deploying their newly-minted LGBT liaisons, Officers Patricia Powell and Brian Sharp. The duo are scheduled to appear at several events, including the kickoff party Friday, throughout the park on Saturday and the parade on Sunday.

“This is a great opportunity for us to get out there and celebrate this important weekend and get to know the community better,” Powell says in a statement. “I also hope more people get to meet Officer Sharp. We’re excited about working together and making an impact – both for the Atlanta Police Department and for the community.”

Maybe Powell can accompany department brass to the “women’s march” on Saturday. Say it with us: d-y-k-e-s.