‘Save Me’ provides unique look at ex-gay movement 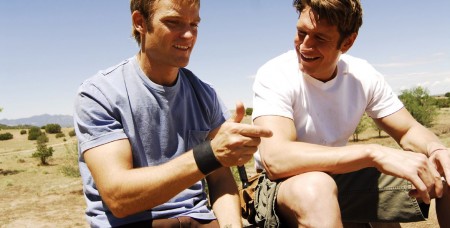 The difference between the last two film projects of Robert Cary couldn’t be more stark.

Cary, putting the finishing touches on the romantic comedy “Ira and Abby,” was intrigued when Judith Light’s manager talked with him about a new project. But the film would provide an interesting challenge to the gay director – it was the story of an evangelical woman running a ministry to convert gay men to heterosexuality.

But he bit and little more than three months after that initial conversation, Cary was in New Mexico shooting in an 18-day spree with actors like Light (“Ugly Betty,” “Who’s the Boss?”) who had proven gay-friendly bona fides and gay actors including Chad Allen (“Dr. Quinn Medicine Woman”) (top photo left) and Robert Gant (“Queer as Folk”) (top photo right). The project put them in the middle of a topic that has roiled gay and lesbian activists – an ex-gay movement that argues homosexuality can be cured through spiritual guidance.

“Save Me” follows Mark (Allen), a gay drug and sex addict who finally hits bottom after an overdose. His brother checks him into an ex-gay Christian ministry run by Gayle (Light) and Ted (Stephen Lang), who offer guidance away from the “sexual brokenness” of homosexuality with a 12-step program. Mark leaves behind his initially rebellion and suspicion of the ministry’s work and forms a bond with Scott (Gant). As that romance blossoms, Gayle becomes increasingly aware and the conflict of the movie unfolds.

Cary talked about the movie, his experience with religion and the compassionate portrayal of ex-gay ministries in the film prior to its Oct. 31 opening at the Midtown Art Cinema.

Q: How did you come to know about the ex-gay movement?
A: Judith Light, honestly. She had done my previous film and her manager called me up when I was cutting “Ira & Abby” and talked about this project, which they had been nurturing for years and asked if I would be interested. I read the draft that was circulating at the time and it was different than what we shot, but it was very compelling especially if were able to tell the story from both sides of the issue. I worked with the writer, Robert Desiderio, and very quickly was rolling cameras about three months after I was hired.

Q: Has there been reaction to how the story is told in the film — the balance being given to those who believe in and those who condemn the ex-gay movement?
A: We have gotten reactions form both sides. Even at Sundance where it premiered, we had a fundamentalist group in Utah that came to see it and responded to it extremely favorable. Gay audiences, particular gay audiences who have come form religious backgrounds or religious parts of the country, have really been very moved by this and they tend to almost always say, “I want to share this with my family or friends I grew up with.” They think this is a chance to look at this in a way to have a discussion.

I’m an atheist and I have very little religion n my life. I always say that this is like [“Brokeback Mountain” director] Ang Lee directing the “Ice Storm” [his 1997 dram with Kevin Kline and Tobey Maguire] One of the things that was actually helpful to me was that I didn’t have a strong religious background and made it easy for me to embrace both sides of this. I think where I come down on this personally is very apparent to those who know me. I didn’t have an agenda with this film except to tell the best possible story. I didn’t say to Robert [Desiderio] the writer or to Judith or [producer] Herb Hamsher that I have to tell this from both sides. I campaigned to do that because I felt like we would have an audience that made up their minds 10 minutes into the movie and I wouldn’t know what to with them for the next 80 minutes.” 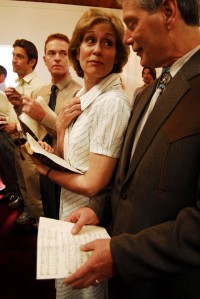 Q: What personal experiences helped inform your directing in “Save Me”?
A: The directing and storytelling – my sense of those I rooted for, what I think of as the way people live and the way people behave. There is not one iconic gay person or one iconic Christian. Whatever ambiguities and that exist are an expression of my world view. But I am not somebody that comes from a religious background and have never been at an ex-gay ministry. I try to tell the story I’ve been given the best way I know.

Q: Were the gay actors or the gay-friendly actors, like Judith Light, hesitant to take on roles friendly to the ex-gay movement?
A: We had people who were actors in the film that had come from religious backgrounds and had different levels of exposures to families with opinions about homosexuality and their religion. When the actors came to the set, they came to play a part in a story. They didn’t come to play a part in a debate. They came to be actors and do their job, including Judith, who has been an incredible advocate for the LGBT community. It was shot in 18 days and the focus was intense and the focus was on the work. We were not worried about the result outside of what we could see in the viewfinder.

Q: Chad Allen, a gay actor, portrays a drug- and sex-addicted gay man. Was there pushback to that?
A: That is one of the ways people find their ways to ex-gay ministries. Often people who come to ex-gay ministries who are young. Addiction is part of it, too, and the reason that it was important for me as a story telling perspective is that this was a place that can do some good, that some healing can be done. The question is at what price?

Q: The initial sex scene with Allen is steamy. How did you approach offering some skin in a movie that has an otherwise serious storyline?
A: There is only one sex scene in the movie and the rest of the movie is very chaste, actually. That scene is very important to me so I can see what this person’s life is like. To avoid the depiction of sexuality would have shirked my duties with that character. This film is a narrative, not a public service announcement. It was important to me to reflect different aspects of the gay experience without feeling we were making this film less palatable. This film talks about the dangers of trying to change the people we are. I didn’t want to homogenize what these characters are about. It is not about balancing tonality, it is about going where the story leads us. He is trying to move away from an extremely addicted and hyper-sexualized life into something else.

Q: The guy gets the guy at the end of the film. Was a happy ending a foregone conclusion?
A: For me there is sense that these characters are going into a future that is at best uncertain. The tools they have for loving are extremely fragile. I think it is anybody’s guess for anybody in this film, including Gayle [Judith Light], who is very much changed by what happens in the film.

Q: What’s your target audience for the film?
A: Gay people and people who are people of faith and have people who they love that are gay or who are concerned about sexuality and its impact on society. It might find audiences that may not see gay films under any circumstance because we aren’t there to make judgments.